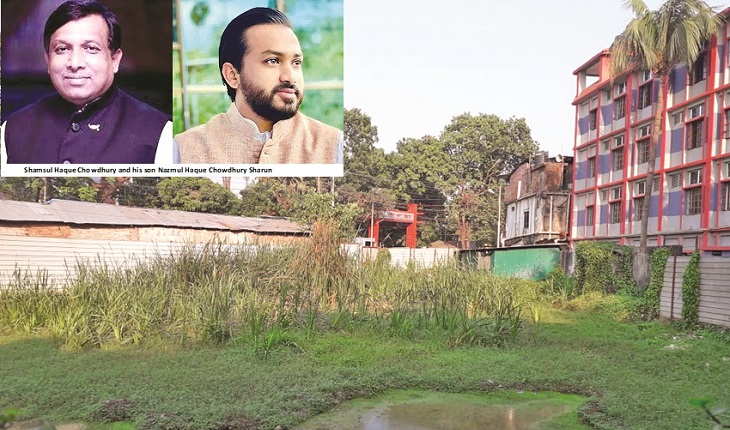 A piece of land belonging to a century-old mosque at Patya in Chattogram has been fenced with corrugated iron sheet by Jatiya Sangsad Whip Shamsul Haque Chowdhury (Inset left) and his son Nazmul Haque Chowdhury Sharun (Inset right) in a move to grab the property. The photo was taken on Saturday.

They have long been making headlines committing various irregularities and corruption. Now, they are facing the allegation of grabbing century-old Patiya Thana Mosque to construct a multi-storey market there.

The duo has changed the name of the mosque to implement their evil plan. For protesting the move, some police officials faced their wrath. The police administration is unhappy with the matter.

The whip and his son are so vindictive that police officials are afraid of making any comment on the mosque issue.

Wishing anonymity, a police official said, “Whip Shamsul Haque Chowdhury and his son Nazmul Haque Chowdhury Sharun are trying to grab 22 gandas of land of the thana mosque to construct a 10-storey market at the place.”

As part of the plan, the duo has constituted a mosque committee comprising of a loyalist leader and changed the name of the ancient mosque.

The committee has entered into a deal with a developer company connected to BNP-Jamaat leaders of the area. They are done with all procedure to demolish the mosque and construct the high-rise market.

As per the layout, the market will have 400 shops. Whip and his son are allocating the shops to the interested people at Tk 30-40 lakh each.

The Shamsul Haque family is set to make an illegal business to the tune of Tk 150 crore in the name of allocating shops.

Police officials, who objected to the decision, are facing frowning from the whip and his son.

“We’ve been seeing the thana mosque since childhood. A few years ago, the whip and his son grabbed the mosque through their loyalists. They remained behind the scene. They completed all procedure to demolish the mosque and construct a market there. We’re facing an embarrassing situation due to their activities,” said an Awami League leader wishing not to be named.

An investigation found that Patiya Thana Jame Mosque was constructed on 22 gandas of land in 1890. Usually, the mosque is run by a committee with ASP (Patiya circle) or OC as its president and a representative of devotees as secretary.

In 1994, an account of the mosque was opened with Patiya branch of Janata Bank Ltd. Transaction in the account used to take place under joint signatures of Patiya OC and another person. The existence of the Patiya thana mosque was evident in various government surveys.

In the last decade, the value of land in Patiya doubled and redoubled. Shamsul and Sharun became greedy to grab the mosque land due to its commercial value.

They formed a seven-member new committee with then municipal mayor Harunur Rashid as its president in 2013. They also decided to construct a 10-storey market demolishing the mosque. They signed a deal with pro-BNP-Jamaat farm Nusrat Development Company Limited. One of the owners of the farm is upazila BNP leader Shafiqul Islam Chairman. Other owners are also affiliated with BNP-Jamaat politics.

In 2018, the pocket committee of the whip family renamed the mosque as Patiya Thana Chadu Talukder Jame Masjid.”

Defying the court’s judgment, the whip and his son are going ahead with their plan to demolish the mosque and construct the market.

They are also taking Tk 30-40 lakh from each of the aspirant allottees. They are set to earn Tk 150 crore from the project.

A police official said the home of Harunur Rashid is located in a place which is 4 km away. He was never at the helm of the mosque. Whip and his son put him at the top of the committee in order to grab the land and construct the market.