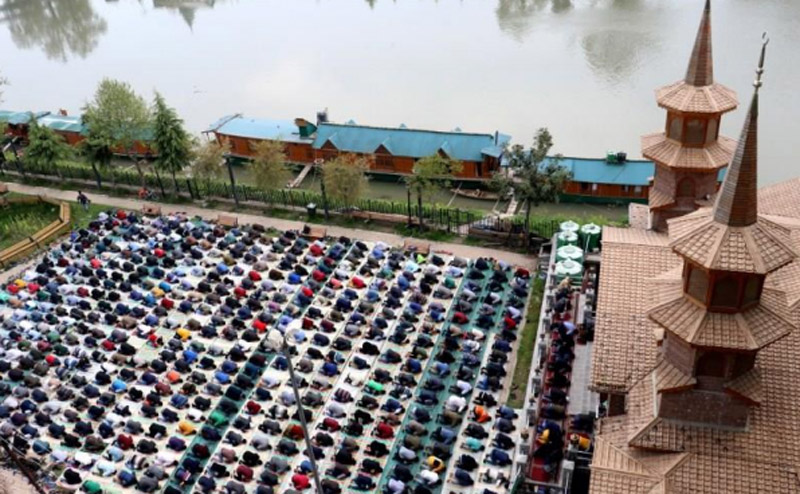 The holy month of Ramadhan commenced in Jammu and Kashmir with religious fervour on Wednesday.

The festive buzz created by Ramadhan has been quite evident in the markets of summer capital Srinagar as shops and vendors selling dates and other eatables were thronged by people.

People could be seen making purchases including that of fruits while the demand for mutton and poultry items has also witnessed a sharp increase in the last few days.

In the summer capital Srinagar, many of the restaurants, roadside tea stalls and vendors selling eatables were closed on Wednesday on the first day of Ramadhan.

The markets in city centre Lal Chowk could be seen bustling with shoppers. Mehraj-ud-din, a fruit vendor on the busy Residency Road said different varieties of dates and fruits were in demand.

“It is quite good to see that people making purchases are wearing masks. The demand for fruits, especially water melons like every year is quite high this Ramadhan as well,” said Mehraj. Muhammad Saleem, a dry fruit merchant at Raj Bagh said among the dates, Ajwa, Safawi, Qalmi and Mabroom were the varieties from Saudi Arabia that have gained popularity among people in Kashmir.

“We are selling more than one dozen varieties of dates and people are ready to purchase even the ones that are priced on the higher side,” Saleem said.

It may be mentioned that the administration had last week imposed night curfew in several districts from 10 pm to 6 am following a surge in Covid-19 cases.

However, religious organisations had expressed concern that this could affect Taraweeh and Fajr (morning) prayers. Lieutenant Governor Manoj Sinha had earlier this week directed Deputy Commissioners and Senior Superintendents of Police to facilitate prayers and religious functions during the month of Ramadhan during curfew hours in their respective areas of operation.

This was welcomed by the religious leaders who assured that prayers would be held after following SOPs strictly.

The Anjuman Auqaf of Jamia Masjid (AAJM) had announced that prayers at the grand masjid would be held under strict observance of SOPs.

However, any violation by devotees would force AAJM to review the decision on prayers at Jamia Masjid, the Anjuman had said in a statement.