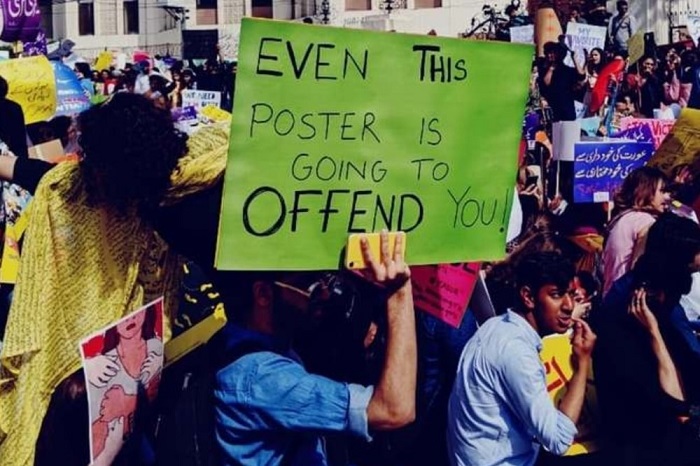 The Peshawar police on Thursday booked organisers and participants of the Aurat March in Islamabad on the orders of a local court on the charge of committing blasphemy.

They, however, made no arrests immediately.

The FIR was registered at the East Cantonment police station, under sections 295-A and C of the Pakistan Penal Code, which deals with ‘malicious acts intended to outrage religious feelings of any class by insulting its religion and use of derogatory remarks in respect of Holy Prophet Mohammad (PBUH)’.

Five Peshawar-based lawyers led by Ibrar Hussain had filed a petition with the court of additional district and sessions judge Syed Shaukat Ali Shah last month seeking the registration of a case against the organisers and participants of the Aurat March in Islamabad under Section 22-A of the Code of Criminal Procedure over an alleged blasphemy.

On March 24, the court hearing the said petition had ordered the officials of East Cant police station to register the FIR against the March’s organisers.

In the FIR, the complainants said the Aurat March was held in Islamabad and other cities of the country on the occasion of the International Women’s Day on March 8.

They alleged that during the Islamabad event, the participants had uttered derogatory remarks against the Holy Prophet Mohammad (PBUH) and other sacred personalities of Muslims, and displayed un-Islamic and obscene posters on the instructions of organisers hurting the feelings and sentiments of Muslims, including theirs.

The complainants also filed a contempt petition against the police for delaying the FIR registration.

On Thursday, station house officer of East Cantonment police station Imran Alam appeared before the additional district and session judge and presented a copy of the FIR before the court.

The court disposed of the contempt petition following the FIR’s production of FIR by the police.

The petitioners through their counsels Gohar Saleem and Ajmal Mohmand had submitted to the court that the East Cantonment police station was deliberately delaying registration of FIR despite court orders and flouting court’s orders.

Earlier, petitioners Ibrar Hussain, Israr Hussain and three other lawyers had approached the court under Section 22-A of the Code of Criminal Procedure (CrPC), which empowers the court to act as ‘Justice of Peace’ and issue an appropriate order in case of non-registration of a criminal case by the police.

The petitioners had claimed that they had approached the police station but the staff members were reluctant to register the case.

Following the proceedings, the court had ruled that the contents of the petition constitute a cognisable offence and the local police was under legal obligation to register FIR of the occurrence as per the version of the petitioners.

The court had directed the station house officer (SHO) of East Cantonment police station of Peshawar to register an FIR of the march as reported by the petitioners under the relevant law.

The Aurat March’s organisers have already filed a petition with the Peshawar High Court against the order of the additional district judge on multiple grounds.

They questioned the allegations levelled by the complainant and said no objectionable thing had happened during their event in Islamabad.

The organisers also wondered how an FIR could be registered in Peshawar when the event was held in Islamabad.

Few days ago, a high court bench had sought comments from the government and local police on that petition.

Earlier, the KP Bar Council passed two resolutions in its meeting on March 15 urging the government to take action against the organisers and different NGOs for holding the Aurat March in different cities of the country.