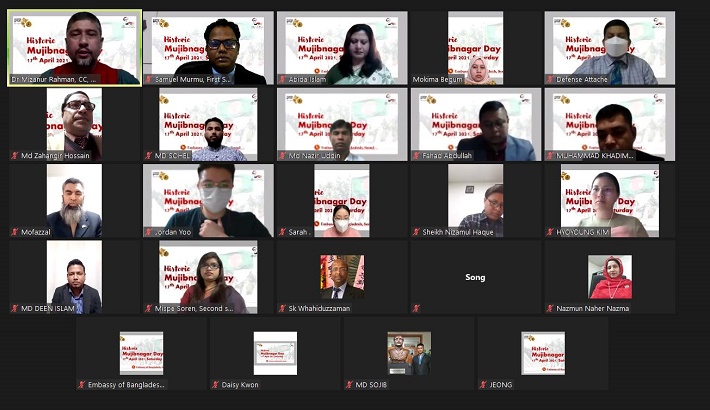 The Embassy of Bangladesh in Seoul of South Korea observed the Historic Mujibnagar Day on on Saturday (17 April) with due solemnity and fervor.

The event was attended by the officials of the Embassy at virtual platform.

The day’s programme commenced with the reading out of the verses from the Holy Scriptures.

A special prayer was offered for the salvation of the martyrs of the Liberation War and also for the peace and prosperity of the country.

A documentary on the background and significance of the Mujibnagar Government was also screened in the programme.

In the discussion session, the discussants highlighted the immense contribution of the Mujibnagar Government, headed by the greatest Bangali of all time, Father of the Nation Bangabandhu Sheikh Mujibur Rahman in absentia, in achieving the much-coveted independence through conducting the War of Independence and maintaining close and strong relations with the international community.

She pointed that the formation of Mujibnagar Government provided our struggle for independence the required legal basis and authority as it was consisted of elected members from the national and provincial elections held in the then East Pakistan during that time.

This legal standing of Mujibnagar Government assisted us to mobilization of the world public opinion in favour of our struggle for nationhood.

Moreover, the Mujibnagar Government also exposed the brutality and genocide of the Pakistan army during that time played a very important role in the management of refugees and in determining the strategies of warfare.

In this connection, she recalled with profound respect the immense contributions of the diplomats who condemned the genocide of the occupying Pakistani forces in Bangladesh and expressed their allegiance to the Mujibnagar Government.

They joined the diplomatic front of the War of Independence and assisted the Mujibnagar Government in building public opinion in favor of Bangladesh, obtaining international humanitarian assistance for Bangladeshi refugees-based India and maintaining close ties with countries sympathetic to Bangladesh.

As a result, most of the countries in the world supported Bangladesh’s war of independence, with the exception of a few, she added.