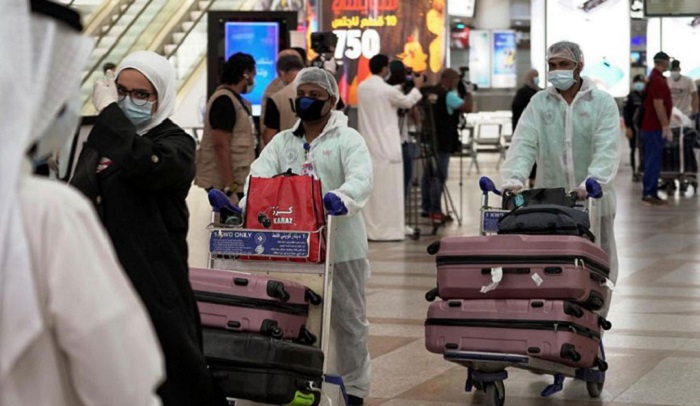 Flight cancellation has caused immense sufferings to hundreds of passengers at the Hazrat Shahjalal International Airport (HSIA) in Dhaka.

Hailing from different parts of the country, expatriates gathered at the airport to avail themselves of the flight.

Amid strict lockdown, they came to Dhaka and then airport at the cost of money and patience, but they are stranded at the airport.

Some of the expats are reportedly staying at the airport area for last two days without any specific clarification from the airliners.

Earlier, the government decided to operate special flights of national flag-carrier Biman to five countries, including four in the Middle East with high concentration of Bangladeshi expat workers from April 17.

On Thursday, Tahera Khandaker, deputy general manager (public relations) of Biman, issued a statement that these special flights could be availed to fly to three cities in Saudi Arabia (Riyadh, Dammam  and Jeddah), two of the United Arab Emirates (Dubai and Abu Dhabi), Oman's Muscat, and Qatar's Doha in the ME, as well as the city-state Singapore.

"The passengers who have made reservations for scheduled flights, set to operate after 6am Saturday, are requested to be at the airport with Covid-19 negative certificates six hours before the departure time," she said.

Apart from national carrier Bangladesh Biman, other airliners at home and host countries are allowed to operate flights for the purpose.

Following the announcement, many expats have gathered at the airport.

Talking to News24 TV, a passenger said “I have come from Narsingdi at the cost Tk 8,000. My flight is scheduled for 2.50pm flight today.“

Similarly, other expat said he moved to the airport for going to Singapore but in trouble for cancellation of flight.

Seven flights have been cancelled so far. The passengers who came to airport even six hours ago as per system are in trouble.

Shortage of passengers is one of the main reasons for cancellation of flights, sources said.