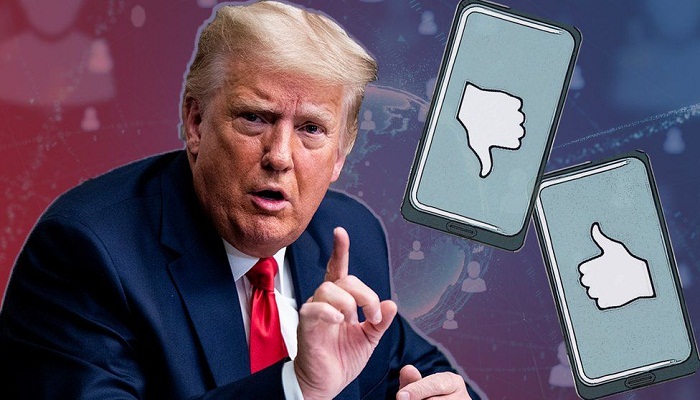 Facebook's Oversight Board has delayed its decision regarding former US President Donald Trump's possible return to Facebook and Instagram.

Mr Trump was banned from Facebook in January after the Capitol Hill riots.

The Board said the delay was due to the time it has taken to review over 9,000 public responses to cases.

A decision was originally due by 21 April. In a statement on Twitter, the Board said it would make a decision "in the coming weeks".

The ruling will be the biggest decision the Oversight Board has had to make since it started taking on cases last year.

The Board was set up to rule on difficult or controversial moderation decision made by Facebook.

The committee is made up of journalists, human rights activists, lawyers and academics.

The group has already ruled on nine cases including:

--a comment that seemed derogatory to Muslims - in a post from a user in Myanmar, removed for breaking hate-speech rules - was found not to be Islamophobic, when taken in context

--an alleged quote from Joseph Goebbels - in an old post reshared by a US user, removed for violating polices on dangerous individuals and organisations - did not support Nazi ideology, again when taken in context

--an Instagram post of eight photographs of breast-cancer symptoms should not have been removed - by Facebook's automated moderation system, only to be restored before the board's decision - for breaking adult-nudity rules

It's not just Mr Trump's account that is banned. Earlier this month Facebook extended their ban to include the "voice of Trump" after his daughter-in-law and Fox News contributor Laura Trump posted a video of her interviewing the former president.

He is suspended on YouTube, but chief executive Susan Wojcicki has said they may lift the ban when the threat of "real-world violence" decreases.

According to data from CrowdTangle, some of Mr Trump's Facebook posts were among the most popular in the US.

It has been a few months without Mr Trump on social media and with the threat of that being permanent, he has been considering creating a platform of his own.

Trump adviser Jason Miller told Fox News in March that he expects the former Republican president will return with his "own platform".