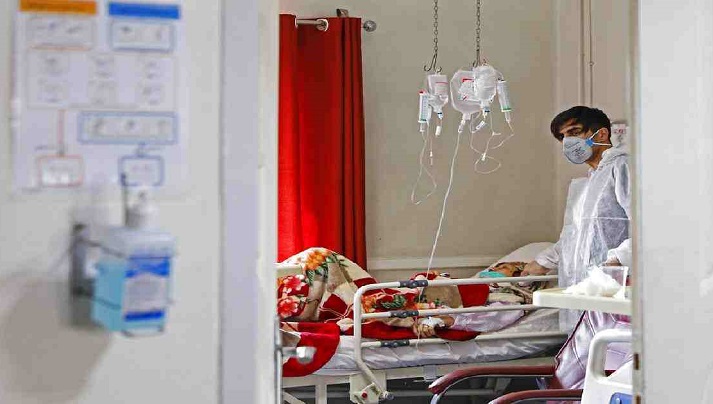 The daily death toll from coronavirus has passed the 100 mark for the first time in the country as 101 virus casualties were reported over the last 24 hours till Friday morning, creating panic among people amid a scarcity of beds at hospitals.

This is the biggest jump in daily virus fatalities since the pandemic. Previous highest 96 deaths were recorded on Wednesday.

With the record daily 101 deaths, the national death tally has reached 10,182.

“Most of those who are dying from the virus are aged above 60 years. The condition of patients with comorbidity is also getting worse. A few young patients have also died recently,” Prof Dr Tahmina Shirin, director of the Institute of Epidemiology, Disease Control and Research (IEDCR), told the Daily Sun on Thursday.

The fatality rate has risen to 1.43 per cent which was 1.42 per cent on Thursday.

According to the Directorate General of Health Services (DGHS), 4,417 new infections were detected in the last 24 hours, taking the total caseload to 711,779.

International Federation of Red Cross and Red Crescent Societies (IFRC) has said a humanitarian calamity is engulfing South Asia as Covid-19 skyrockets across several countries setting new records, with over 200,000 people getting infected every day.

South Asia is fast becoming the new global epicentre of the Covid-19 pandemic, it said on Friday.

However, the numbers started rising further from March 10.

A recent study of icddr,b about the existence of different various variants said, “A dramatic change in the distribution of variants was observed when the South African variant appeared. It became the most prevalent variant during the third week of March 2021 by replacing other variants. Most remarkably, the South African variant occupied 81 per cent of the variants in the fourth week of March 2021.”

“The findings warrant continuous monitoring of genetic variations of SARS CoV-2, which is crucial for vaccine effectiveness and patients management,” it added.

Both government and private hospitals treating Covid-19 patients are now overwhelmed with coronavirus-infected people in the capital and elsewhere across the country and there is a crisis of both general and intensive care unit (ICU) beds.

According to the DGHS, there are 275 general beds for Covid-19 patients at Kurmitola General Hospital in the capital. However, 368 patients were admitted to the hospital till Friday morning.

Hospital authorities, physicians and nurses have been struggling to manage a growing number of patients over the last few weeks. Many hospitals have no adequate medical instruments to treat them.

The DGHS data said over 900 severe patients were undergoing treatment in ICU beds of 13 government and 30 private hospitals in Dhaka district till Friday morning.

Some 5,694 more patients have recovered from the fatal disease in the last 24 hours, raising the total number of recoveries to 602,908. The recovery rate has been reported at 84.70 per cent.

The DGHS sources said an uncertainty looms large over the continuation of the vaccination programme as the government has not yet received any hint to get more vaccine doses soon from any source, including the Serum Institute of India (SII).

Some 5,686,885 people have so far received their first doses of Oxford-AstraZeneca (Covishield) vaccine while 930,151 completed taking their two doses as of Thursday.

The government purchased 70 lakh vaccine doses from the SII and got 33 lakh as gift from Indian government.

With vaccine shots in stock, the government may continue the vaccination drive for around 30 more days.

Health Ministry sources said it is now looking for other sources to get the vaccine as the government is not getting vaccine from the SII as per the deal.

The government may import around 60 lakh Sinovac vaccine doses from China in the first phase and some Sputnik V vaccine from Russia, the sources added.