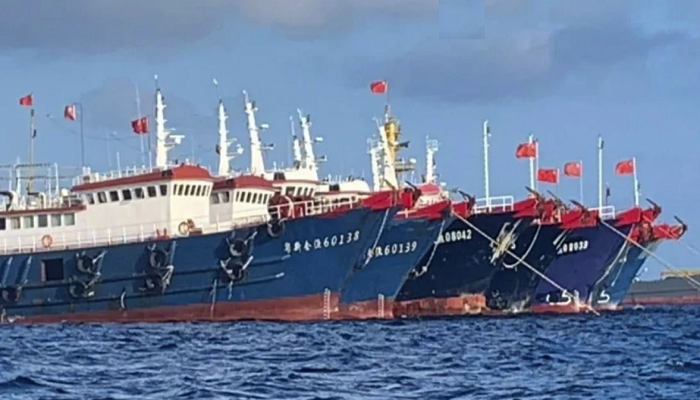 The Philippines on Tuesday said it had summoned Beijing’s top envoy in Manila to press for Chinese ships to immediately leave the Whitsun Reef in the South China Sea, describing the escalating row as a “source of regional tension”.

Officials from the two countries have traded acrimonious remarks since some 200 Chinese vessels, including some believed to be maritime militia, moored around the reef in the Philippines’ exclusive economic zone (EEZ) last month, an incident Beijing insists was prompted by bad weather.

Foreign affairs acting undersecretary Elizabeth Buensuceso on Monday conveyed Manila’s deep displeasure over the ships’ “illegal lingering presence” to Chinese ambassador Huang Xilian, in a meeting where “both sides affirmed the use of peaceful settlement of disputes”, the foreign affairs department said on Tuesday.

The last time the foreign ministry summoned a Chinese ambassador was in June 2019, after a Chinese vessel sank a Filipino fishing boat at Reed Bank and left the crew at sea, the foreign affairs department said.

Nine vessels were still at the reef as of Tuesday, Foreign Secretary Teodoro Locsin Jnr said, citing a government agency. It was not clear if the other ships had left the area completely or had merely dispersed elsewhere within the Philippine EEZ.

“Time to go,” he wrote on Twitter. “While it may well be traditional [Chinese] fishing grounds, tradition yields to law.”
Locsin last week warned that Manila would file a diplomatic protest every day that the vessels continued to linger at the Whitsun, also known by the Philippines as the Julian Felipe Reef.

China has maintained the vessels taking shelter from rough seas, a statement rubbished by Defence Secretary Delfin Lorenzana. It has also slammed Manila’s claim that the ships were manned by militias as “blatant falsehoods”.

The Chinese embassy did not release a statement on Tuesday.

Analysts warned that despite Manila’s protests, it could well lose control of another one of its South China Sea territories to Beijing, which has ignored a 2016 international tribunal decision that declared its historical claim over most of the South China Sea to be without basis.

Collin Koh, research fellow at Singapore’s S. Rajaratnam School of International Studies, said China could be trying to “create a fait accompli that will push the victim – in this case the Philippines – towards a few limited courses of action”.

Koh, who was speaking on Tuesday at a media forum organised by the Foreign Correspondents Association of the Philippines, noted Manila was in a tough position.

On the one hand, if Manila did not react to Beijing’s encroachment, “in Beijing’s view that is basically getting a victory out of it”. On the other hand, a strong response by Manila may worsen the situation, he said.

Koh recalled what happened to Mischief Reef, another feature the Philippines lost to China in the 1990s.
“First we saw just some very few Chinese vessels roaming around the area, gradually a slight increase, then the Chinese solidified their presence,” he said.

“Then we saw wooden structures being built … and gradually become concrete structures, and then what we see today is a full-fledged artificial island complete with air strip and ports and then we have Chinese military aircraft landing on Mischief Reef.”

Koh said as this year marked the 100th anniversary of the Chinese Communist Party, the actions at the Whitsun Reef could be seen as a way for “President Xi Jinping and the Party to try to promote itself”.

“In 2012 when Xi Jinping came to power, he re-emphasised, unlike his predecessor, very greatly on upholding China’s maritime sovereignty and rights,” Koh said.

Earlier this month, the Philippine military invited Manila reporters to join an aerial “sovereignty patrol” over the country’s EEZ. The journalists later wrote articles saying when their aircraft had approached certain islands, they received radio warnings from Chinese controlled island outposts telling them to “stay away” and “leave immediately”. The plane ignored the warnings.

On April 8, one of the reporters, ABS-CBN’s Chiara Zambrano, joined a civilian vessel that sailed to a shoal with a Philippine military detachment. Before it got there it was intercepted by a Chinese coastguard ship.

When the Philippine vessel turned around, the Chinese ship pursued and was later joined by two high-speed missile boats. The pursuit took place well within Philippine territorial waters.

Opposition Senator Risa Hontiveros on Tuesday said that China was becoming “the region’s bully”. She accused Beijing of exploiting a global health crisis “by executing a series of coordinated incursions” into Philippine waters.

“It only shows how China will do what she wants for her own selfish interest, even if it means threatening peace and stability in the region,” Hontiveros said.

The Whitsun Reef row has placed President Rodrigo Duterte in a bind, trapped between the continued encroachment of Beijing and his administration’s desire to foster closer ties with China – shifting the Philippines away from its traditional ally, the US.

The Philippines has received 2.5 million doses of Covid-19 jabs from China’s Sinovac - many of them donated. They have underpinned the country’s inoculation efforts as it waits for the delivery of vaccines from Russia and the West.

Complicating Duterte’s bid to balance the US and China is also a renewed interest by the US in making its presence felt in the region.
Washington, a key military ally of the Philippines, last week reminded Beijing of its treaty obligations to Manila in the event of an attack in the waters.

Carlyle Thayer, emeritus professor of politics at the University of New South Wales in Canberra, said at the media forum that under President Joe Biden’s administration, Washington was reinvigorating and modernising its alliances and partnerships around the world.

Biden’s strategy “will lead to more frequent air and sea encounters”, Thayer said. “Allies and partners will come under increased US and Chinese pressure to take sides.”