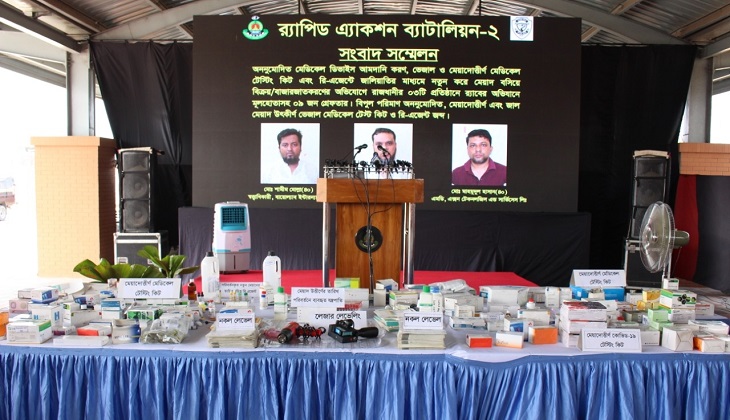 Rapid Action Battalion (RAB) conducted drives at three trading companies in the city and arrested nine people, including owners of the organisations, on charges of importing unauthorised medical devices and reagents and for selling and marketing those items after renewing expired dates through forgery, reports UNB.

The elite force also seized a large quantity of unauthorised, expired and counterfeit engraved adulterated medical test kits and reagents from their possessions.

Based on secret information, an operational team of RAB-2 battalion carried out a drive at Lalmatia and Banani areas from 3:30pm on Thursday to till Friday morning.

During the drive, the RAB conducted a raid at Biolab International  of Lalmatia and then its sister organisations-- Exxon Technologies and Services Limited  and Hi-Tech Health Care Limited  --of Banani areas and arrested the nine people and seized huge quantities of unauthorized, expired and counterfeit engraved adulterated medical test kits and reagents, said ASP Abdullah Al Mamun of RAB-2.

During preliminary inquiries and interrogations, the arrested people revealed that with the help of each other, they were involved in collecting expired test kits and reagents from domestic suppliers at a very low cost and then selling those after reprinting new dates.