Cruise ships head back to Venice despite ban 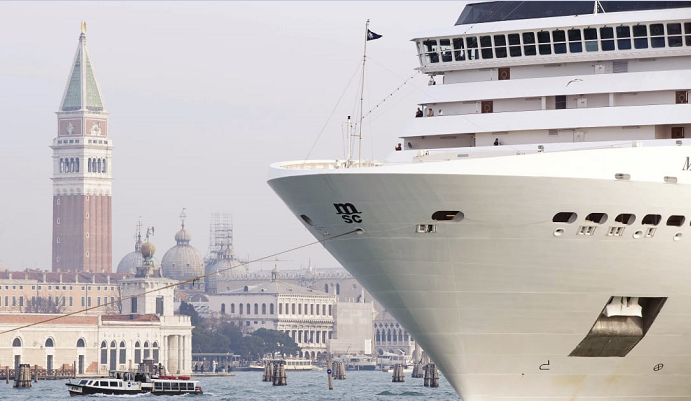 It's set to be one of the first cruises to take to the waters after things start back up this summer.

Departing June 5, the sumptuous MSC Orchestra will take a week-long trip around the Adriatic and the Mediterranean, taking in Italy, Croatia and Greece.

And its journey will begin and end with one of the world's most classic cruise experiences: gliding past the iconic center of Venice, Italy, as it passes St Mark's Square and continues up the Giudecca Canal.

This might come as a surprise for those who heard the news, just 15 days ago, that the Italian government had ruled that cruise ships should be banned from the Venice lagoon.

The site of the enormous ships looming over the floating city is set to be a thing of the past, if the government continues with its plans.

But as a tender process to review plans for potential new ports outside the lagoon gears up, the temporary solution of docking at Marghera -- within the lagoon, but on the Italian mainland -- is not yet ready. Which means that ships taking off this summer look set to dock in the city as they always have.

"We are looking forward to see our guests returning to visit Venice and contributing to the restart of a local economy that is very much dependent on tourism and that as such has suffered greatly over the past many months since the beginning of the pandemic," a spokesperson for MSC told CNN Travel.

Two ships instead of five
The company will use Venice as a homeport for two ships this summer -- a far cry from the five they had weekly in 2019, but two more than the most vociferous cruise critics were expecting.

The MSC Orchestra will be joined by the MSC Magnifica from June 20, embarking at Venice and going on to Bari, Athens, Mykonos and Split in Croatia.

Both local and regional authorities welcomed the news, and confirmed that until further notice, the ships will dock in the city port, as they have until now.

President of the Veneto region Luca Zaia heralded it as a "great sign of a new start."

Speaking at a press conference, he added that the aim was to send them to the new docks at Marghera, "but in the meantime, we're starting with two ships, and this allows us to think that the world hasn't stopped."

Mayor of Venice Luigi Brugnaro called it "good news for the city and its tourist industry," calling the ships "an important symbol."
Talking to local radio station TGR24, he added that the news meant that the city can "look to the future with hope and courage."
Confirming that initially the ships would dock in the city port on the edge of the historical center, he added that the Marghera port should be constructed within the next year, and will be "a temporary solution, used for a few years, until the government decides to construct a port in the sea -- something that seems absurd to me."

His deputy, Andrea Tomaello, was equally bullish, telling local paper La Nuova that MSC's announcement was a "good sign" and that "until Marghera is ready, they'll continue to go to the Marittima [city port."

He added that the Marghera project -- inside the lagoon -- should be considered amongst the plans being presented to the government for a long-term solution, despite the government decree ruling it out.

Long-time opponents of the cruise industry, No Grandi Navi, have arranged an open-table meeting, in which citizens would propose ideas, for April 17.

What the rivals plan
It is not yet clear what other cruise lines intend to do. Royal Caribbean had already announced it was moving its homeport to Ravenna, 90 minutes away, citing "increased concerns regarding the future of cruising in Venice."

Costa and Holland America are both advertising cruises from Trieste, two hours away, as well as Venice.

Celebrity and Azamara are still advertising cruises from Venice. None replied to a request for confirmation from CNN.

However, the spokesperson for MSC told CNN that the cruise lines were in the hands of the authorities: "Exactly from which terminal our ships will serve Venice (and how they will get there) now and over the longer term, will be determined by the local and national authorities and we will follow their instructions as we always have.

"This of course applies also to the upcoming and shortened season and the much reduced number of MSC Cruises ships -- two -- that are scheduled to visit and embark guests from Venice."

They added: "Our guests embarking and disembarking from Venice typically stay additional days, going to local hotels, restaurants and museums."

Over 4,000 people work at the port, with around 1,700 working directly with cruise lines.

With its economy based largely on tourism, Venice has been one of Italy's hardest-hit communities during the pandemic.
This isn't the first time the authorities have tried to ban the ships.

A move by the Italian government in 2019 to reroute large vessels failed when the government fell shortly afterward.
And a government committee ruled in December 2020 that large ships should be rerouted to Marghera. Tenders for plans to design a new hub there had already opened.