Saif Hassan eager to prove himself 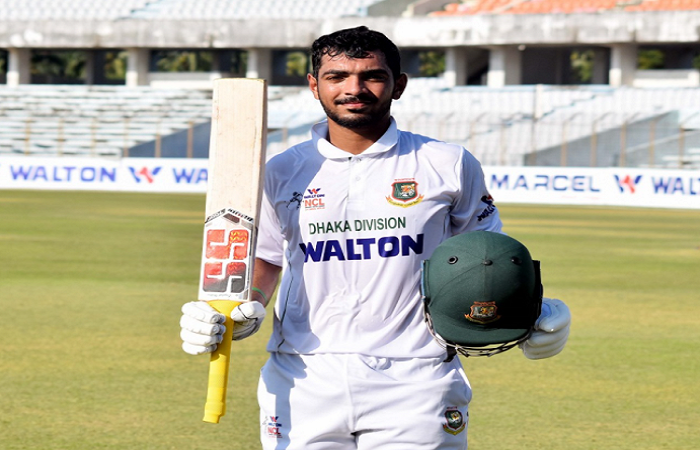 Right-handed top-order batsman Saif Hassan said he is eager to do well for the national team in Sri Lanka series if he gets the chance to play.

The Bangladesh team are now in Sri Lanka to play a two-match Test series against the hosts starting from April 21 at Kandy.

Bangladesh team reached Sri Lanka on April 12 and maintained a three-day quarantine before taking the field for the first practice session on Thursday.

“We’re prepared well ahead of the West Indies series at home. We played well against the Ireland Wolves as well, and after that, we played in the first two rounds of the games in the National Cricket League. I think that preparation will help us in Sri Lanka,” Saif told the media in a video message on Thursday.

In the first round of the National Cricket League, Saif hit a ton for the Dhaka Divison. He smashed a century against Ireland Wolves as well.

“When you score runs you get more confidence to do well. I’m confident to replicate those performances for the national team. If I get selected in the playing XI, I’ll try to do well,” Saif added.

Ahead of the series, the Bangladesh team will play a two-day intra-squad game. The 22-year-old batsman said this match will be a good chance for the Tigers to adapt to the condition.

“The practice match is very important for us. I think it’s a good chance for us to adapt to the condition and get some ideas about the wicket,” Saif said.

After the practice match, the Bangladesh Cricket Board (BCB) will announce the final squad for the Test series. It had earlier announced a 21-member preliminary squad.

This series is part of the World Test Championship. Bangladesh played five matches of this event and failed to win any of them. Sri Lanka, on the other hand, played 10 matches and won only one with six defeats and three draws.

In Sri Lanka, Bangladesh played a total of 12 Tests and won one of them, which was Bangladesh’s 100th Test match. They lost 10 matches and another one ended in a draw.