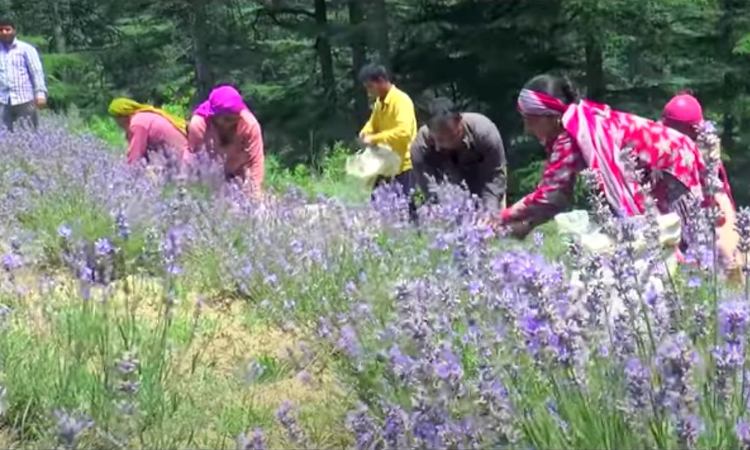 It is late June and the field is glowing with fragrant purple as the women in their flowing shalwar kameez arrive with scythes to harvest the lavender.

In the 30-odd villages on the hilly slopes of Jammu’s Doda District, more than 200 farmers have shifted from maize to lavender production, starting a “purple revolution” in the region.

The village of Lehrote had a moment of agricultural fame this year when a 43-year-old farmer, Bharat Bhushan, won an award for innovative farming from the Indian Agricultural Research Institute, one of several institutions across the country researching ways to adapt farming amid climate change.

Lavender, a drought-resistant crop, can be grown on poor soil and likes lots of sun, but needs little water.

“I started lavender farming in 2010, hesitantly, as an experiment due to the encouragement from the Indian Institute of Integrative Medicine [IIIM] Jammu,” Bhushan said. “It is easy to grow, and does not require much irrigation. I used just cow dung as manure.”

In two years he was earning four times more than he had done growing maize.

“Seeing my success, many followed suit and now more than 500 farmers in this area who are part of self-help groups are engaged in this occupation,” he said. “I have also started two nurseries for propagating lavender saplings.”

“The village has become a lavender producing and distillation hub,” said Bhushan, who has also installed machinery to extract oil from lavender flowers.

“The best part about growing lavender is that many women in villages who are not allowed to work away from home have been encouraged to cultivate lavender around their homes because it is profitable, and this has made them self-reliant,” he said.

“The domestic demand for lavender oil is high, and we sell distilled oil directly to industrial customers in cities in India, like Mumbai and Delhi,” he said. “We also sell dried lavender for potpourri, sachets and flower arrangements, and hydrosol, which is formed after distillation from the flowers, used to make soaps and room fresheners.”

Bhushan was inspired by a video conference with Indian Prime Minister Narendra Modi and the Indian Council of Scientific and Industrial Research (CSIR), which in 2016 launched the Aroma Mission, encouraging farmers whose livelihoods are affected by climate change to grow crops such as lavender, rosemary and lemongrass, and medicinal plants such as Withania somnifera, also known as ashwagandha and Indian ginseng.

“Lavender is a crop native to Europe, but was introduced in the temperate regions of this state by the CSIR Aroma Mission in the districts of Doda, Kishtwar and Rajouri,” said Sumeet Gairola, a senior scientist at the institute. “In 2017, five labs across India were set up with an objective of helping farmers grow 20 medicinal and aromatic crops, across 6,000 hectares all over India.”

Lavender’s easy-to-grow properties make it popular with farmers, Gairola said. “The income generated from lavender farming is much better than growing crops like maize. One hectare of land can generate as much as 30 to 45 liters of lavender oil, which is in high demand as an essential aromatic oil.”

Many farmers in Kashmir are starting to cultivate the crop, often growing it alongside apple orchards.

Recently, CSIR announced the expansion of the Aroma Mission, with the launch attended by farmers from other northern states such as Uttarakhand, Nagaland and Assam, so the purple blooms could soon become a common sight across India.