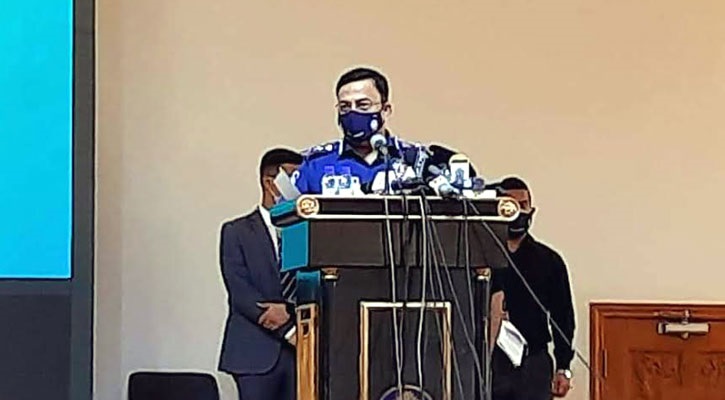 Inspector General of Police (IGP) Dr Benzir Ahmed has given instructions to all police unit chiefs for strict implementation of the government restrictions which have been enforced from and will continue till April 21 aiming to halt the sharp rise of coronavirus in the country.

The IGP gave the instructions to all police commissioners, range deputy inspector general (DIG), district police supers, thana police officials and in-charges through a video conference on Tuesday evening to curb the corona virus infection and marking the holy month of Ramadan.

The police chief requested the people not to go outside without any emergency during the restriction, adding people must have to keep ‘police movement pass’ when they roam outside.

People must wear facemasks and follow other necessary health guidelines when they travel outside for any emergency, said the police chief. The police chief also instructed the police officials to enforce the government restrictions with due patience and wisdom.

“Movement of food, goods, medicines, manufacturing commodities and other emergency service providing vehicles would have to be hassle free,” said the IGP.

At the same time, the IGP asked concerned officers to regularly monitor uploaded rumour, comment, picture and confusing posts on the social media about corona infection, lockdown and Ramadan which usually hurts religious sentiment of people. He said the rumour mongers must be brought to book.

The farm labourers who are engaged in harvesting boro crops are allowed to travel from one district to another district under special transportation arrangement by the concerned deputy commissioner.”Any kind of extortion won’t be tolerated on the highway during the holy Ramadan,” the IGP told the meeting.

The IGP warned all not to make crowd inside or outside the mosque during Jumah or any prayer during the Ramadan, he said, adding no iftar mahfil is allowed inside the mosque.

Benazir also called for imposing surveillance by the intelligence to curb distribution of posters and leaflets by any banned religious fundamentals outfit during the Ramadan. Even mass gatherings of people are strictly prohibited in the name of distributing Jakat, fitra and food items, he added.

The IGP also instructed the concerned police officials to enhance cooperation with the concerned authority to check artificial crisis and price hike of the essentials during the Ramadan.