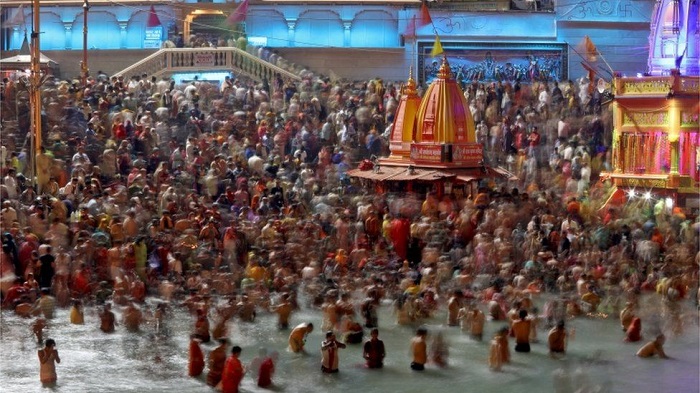 Hundreds of devotees, including nine top saints, have tested positive for Covid-19 in India's Haridwar city where huge crowds have gathered to participate in the Kumbh Mela festival.

More than three million Hindu devotees bathed in the Ganges river on Tuesday to mark one of the most auspicious days of the two-month-long festival.

Millions are expected to repeat the ritual on Wednesday.

India reported 184,372 new cases on Tuesday - its highest-daily spike yet.

Many have criticised the government for allowing the festival to go ahead amid a raging pandemic.

Officials said that nearly 900,000 people had taken a dip in the holy river by afternoon on Wednesday, which is considered to be the most auspicious day of the entire festival.

Hindus believe that the Ganges river is holy, and taking a dip in the water will cleanse them of their sins and bring salvation.

Police officials say they are struggling to impose safety norms due to huge crowds on the banks of the river in the Himalayan state of Uttarakhand.

Officials leading the festival's Covid-19 testing cell told the BBC that out of more than 20,000 samples collected in the area on Tuesday, 110 returned positive results. On Monday, 184 devotees had tested positive. They have been isolated while others have been moved to hospitals in Haridwar city.

Narendra Giri, the president of a consortium of 14 Hindu groups, also tested positive. He has been admitted to the All India Institute of Medical Sciences, which is a leading public hospital, in Haridwar.

Yogi Adityanath, the current chief minister of Uttar Pradesh, has also tested positive although he did not visit the festival.

On Tuesday, Haridwar recorded 594 new cases, bringing the total tally of active cases to 2,812. Between Monday and Tuesday, it recorded more than 1,000 new cases.

There has been growing criticism of the government for allowing the gathering to take place even as India records huge surges in daily cases. Health experts had appealed for the Kumbh to be cancelled, but the government went ahead saying that safety rules would be followed.

Tirath Singh Rawat, the chief minister of Uttarakhand, told the media that "we are following the heath ministry's guidelines and the recovery rate is good".

"Arrangements are also adequate to deal with any situation."

"Ma [mother] Ganga's blessings are there in the flow [of the river]. So there should be no corona[virus]," ANI news agency quoted him as saying.

The government had earlier said that only people with Covid negative tests would be allowed to enter the festival, and that strict measures like social distancing would be followed. However, reports said that the administration is struggling to keep Covid safety protocols in place with many entering the festival without showing negative results.

The second wave is wreaking havoc across India. Reports of a shortage of hospital beds, life-saving drugs and medical oxygen have started coming in from different parts of the country. The western state of Maharashtra, which has been the worst affected by the virus, announced tighter restrictions on Tuesday evening. Chief Minister Uddhav Thackeray said that for the next 15 days, only essential services would function.

"The war has begun again," he said at a press conference. The state recorded more than 60,000 cases on Tuesday.