Car ferries in the skies: The rise and fall of the Aviation Traders Carvair 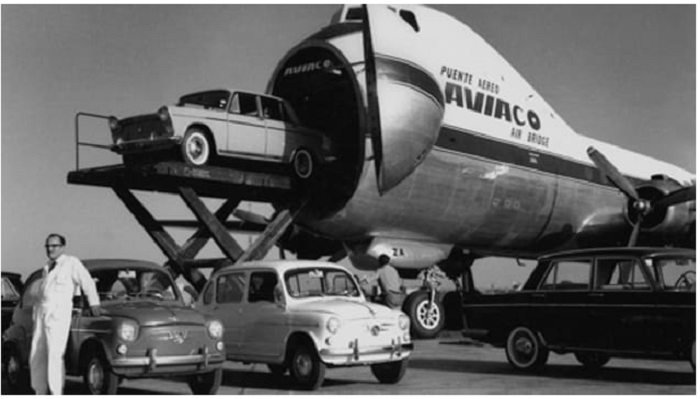 If an aviation enthusiast were to compile a roster of the world's weirdest looking planes, the ATL-98 Carvair would definitely merit a place of honor.

Its bulbous nose, seemingly out of proportion with the rest of its body, give this now-defunct plane a chubby, unmistakable appearance.

And yet the Carvair, which made a brief cameo in the James Bond movie "Goldfinger," anticipated features that we would later see in iconic aircraft types, such as the Boeing 747.

This odd-looking plane was actually a heavily modified Douglas DC-4 airliner designed to fulfill a very particular mission in the 1950s: flying both cars and their drivers overseas.

British car owners wanting to drive their own vehicles around mainland Europe could choose between the slow, and potentially shaky, sea crossing, or simply hop over to the continent by air -- car and all.

Travelers would drive right onto the airport apron and into the belly of the waiting aircraft, just as they would with a ferry that carries automobiles across water.

Born from post-war travel dreams
Aircraft like the Bristol 170 Freighter and its larger derivative, called the Superfreighter, started carrying automobiles as cargo from the mid-1940s, shortly after the end of WWII.

Those planes were sturdy machines that sacrificed speed and range for robustness and economics. They featured clam-like frontal doors that opened sideways to allow cars to be driven into the cargo hold, while the raised cockpit increased cargo capacity by making the whole length of the fuselage available for self-rolling loads.

As ingenious as this design may have been, though, these aircraft had a rather limited payload and could carry no more than three average-sized cars at a time.

By the late 1950s, with the war years in the rearview mirror and car ownership on the rise, legendary aviation entrepreneur Freddie Laker spotted an opportunity.

Laker, who would later be known for his pioneering, but ill-fated, low cost airline ventures in the 1970s and early 80s, came up with the idea to build a larger and better car ferry.

With the advent of the jet era, loads of World War II-era propeller planes such as the DC-4, or its military version, the C-54, were fast becoming obsolete and could be had on the cheap. This worked in Laker's favor.

One of the companies already in his portfolio, Aviation Traders Limited, had accumulated ample experience refitting and repurposing a large number of military aircraft that had served in the war for civilian use, making it well-placed to execute his vision.

Linking the UK to the mainland
To create this airborne car ferry, Aviation Traders Limited took a DC-4, cut its forward section and added an additional section to stretch its fuselage. Next, it was fitted with the Carvair's characteristic elevated cockpit and a couple of side-hinged doors that allowed cars and other cargo to be loaded through the front.

The resulting aircraft would be able to carry up to five cars and 22 passengers at once, a significant improvement over the Bristol 170 Freighter.

Even better: this configuration could be quickly and easily adapted to meet the needs of the moment. For example, it could carry just three cars and 55 passengers or converted to carry either just cargo or only passengers. If the latter option was chosen, the Carvair's non-pressurized cabin could be fitted with as many as 85 seats.

When in car-carrying mode, vehicles would be elevated to cabin level with a scissors-type lift and loaded through the front door, while passengers would sit at the back of the plane, just as they would in a conventional airliner.

The Carvair was developed primarily for cross-Channel routes linking the UK to the European mainland. In its apogee, Channel Air Bridge, another firm in Freddie Laker's aeronautical empire, operated 24 daily roundtrip flights from Southend airport, near London, to Calais (France), Ostend (Belgium) and Rotterdam (The Netherlands).
Eventually the network would stretch much further into continental Europe, with planes heading to Strasbourg on the French-German border and the Swiss cities of Geneva and Basel.

In Spain, domestic carrier Aviaco used Carvairs to operate a regular car-carrying air shuttle between the Balearic Islands and the Spanish mainland, while Aer Lingus ran car ferrying operations between Ireland and UK cities Liverpool and Bristol as well as Cherbourg in France.

Why don't we see car ferries in the skies today?
Twenty-one Carvairs were built between 1961 and 1968. But, simultaneously, faster and more efficient sea transport options became available on most of the routes served by the air car ferries and none of the new, modern aircraft were developed for this niche market. In the end, the concept simply faded away.

But the evaporation of the car ferrying market and chronic maintenance issues did not prevent Carvairs from continuing to operate as freighters for a string of cargo operators all over the world, from New Zealand and Australia to the US, Europe and Africa.

Despite a rather high attrition rate, with nearly half of the global Carvair fleet being lost to accidents at some point in its nearly four decades of service, some of them kept flying at least until 2007, when one of the last few surviving airframes crashed, with no victims, while attempting to land at the Nixon Fork Mine, in Alaska.
As of 2021, no Carvair is known to be operative, although a couple of airframes are in long term storage. Their airworthiness status is uncertain.

One of them is in Gainesville, Texas, where it has been parked at the local airport for a number of years. The other belongs to Phoebus Apollo Aviation, a South African pilot training school, based at Rand airport in the outskirts of Johannesburg.

Attempts to contact this firm and ascertain the status of the aircraft went unanswered, although the pictures that are publicly available (including those found on Google Earth) suggest it is no longer fit to fly.