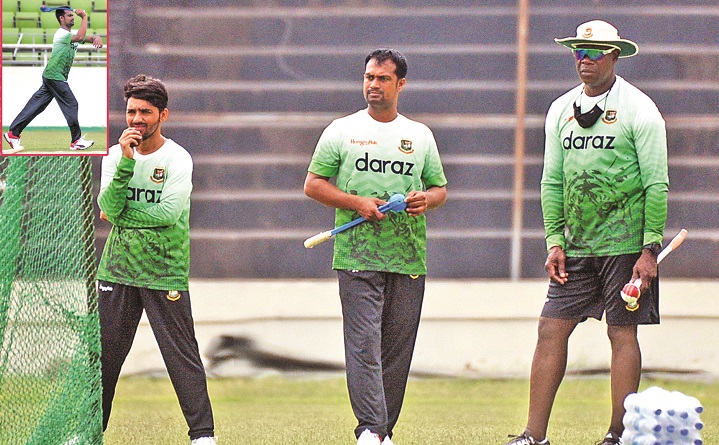 Bangladesh’s Shuvagoto Hom certainly looked uncomfortable in the nets facing those odd deliveries that were rising from the back of a length.

It was not surprising due to the fact let alone Shuvagoto, who returned to the Test squad after a gap of five years, even seasoned campaigners struggle the country’s leading throwdown specialist at the moment, who is known as Jofra in the national dressing room.

“Otis (Gibson) was telling me to bowl short balls on Saturday to Shuvagata Hom, as I can bowl all kinds of deliveries to them. I basically try to find out the weak spots of the batsmen and bowl them in that exact spots, so that they can work on that weakness, and get themselves better,” Ramjan told The Daily Sun afterwards, who is living out his dream at the moment as he prepares to board with the Test squad for the upcoming two-match Test series against Sri Lanka.

The former BCB groundsman is certainly indebted to Test skipper Mominul Haque as he was one who spotted his credentials as a throwdown specialist while added that he is enjoying the Jofra tag.

“I had got the name (Jofra Archer) when I was working with the HP (High Performance) team and later in the Bangabandhu T20 Cup Tournament as well, as I had bowled with the same bowling action to him (Archer), and also have maintained quite similar lines and lengths,” said Ramjan.

“I joined BCB as a groundsman in 2008 and later one day I was throwing to Mominul before the Test series against New Zealand at home in 2013 when he told me to carry on with it as he loved my pace,” he said.

“I was throwing with an empty hand and later on gradually turned into a throwdown specialist. I’ve been working as a throwdown specialist since 2014 and though I was not part of any touring party whereas I used to work basically in the indoor sessions and if there was a national camp I was always called up in it,” he said.

Ramjan didn’t take time to showcase his mettle as soon he was called by others that include batsmen like Tamim Iqbal, Mushfiqur Rahim and Shakib Al Hasan to name a few during their individual training session.

Ramjan added that nowadays he concentrate on following a strict routine while added that he gives all attention to the need of the batsmen while picking up the throwing stick.

“I basically keep up my energy, along with taking care of my shoulder muscles, back, and legs muscles, to be fit for the throwing because I have to throw a lot of deliveries during the practice session,” said Ramjan adding that being a groundsman helps him understand about the wickets better while there are few who can negotiate him better than others.

“Yes. It does help (being a groundsman). When I bowl on a particular wicket, I can find out whether the wicket has some bounce on it, or it has turns. I have bowled to all of them, and I’d say everyone enjoys me throwing the balls to them, but I’d like to mention two of them as Mushfiqur (Rahim) Bhai and Mominul (Haque) Bhai can hit them with such ease when I’m throwing it to them,” he said adding that he is enjoying his life.

“There has been a lot of change in me, as I’m doing something completely different than what I had used to do earlier, but I enjoy it most, as I had worked hard to get myself in a better place in life and I suppose I have earned it,” Ramjan said adding that there are few who can negotiate him better than others.