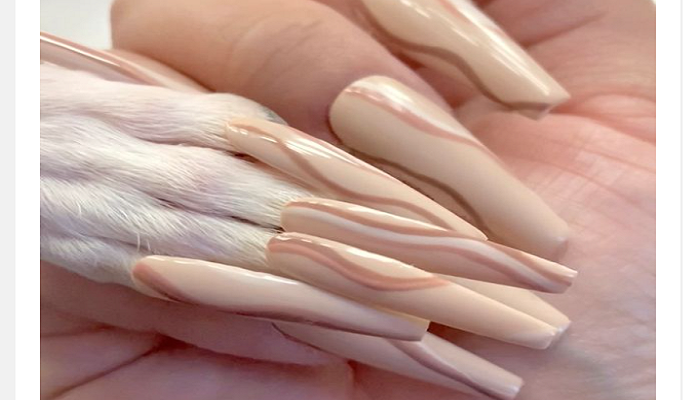 A pampered pooch has become an online sensation after her owner made a set of fake nails for the little dog to wear.

Maritza Rubalcava, a nail technician, went viral on TikTok after sharing videos of her carefully crafting sets of tiny false nails for her chihuahua Coco.

The 25-year-old, who posts under @bellamourbeauty, spends up for 40 minutes making the nails before applying them gently to Coco's paws.

She claims she only puts them on for show and doesn't actually let the pup walk around in them.

Her clips have garnered over three million views and while some think the nails are brilliant and wish they could have some for their own pets, others were appalled and branded it "animal abuse".

Maritza, from California, US, said: "Coco is my baby and one night my husband and I were talking and we thought it would be so cute to make her some tiny fake nails.

"I just did it for fun and it felt so random but it turned out well.

"She loves being pampered so she really enjoys the process of me sticking the nails onto her claws with adhesive pads.

"Coco just models them for pictures because they're obviously really not practical for a dog to wear all of the time.

"It's just a little bit of bonding time with my dog and I really enjoy it."

Maritza has already made four different sets of nails for Coco, after starting her own nail business in October last year.

She says she finds it "crazy" that her videos have garnered so much attention and she knows that there are some who hate them.

"A lot of people love the idea but some people didn't," she admits. "I had some people who were so shocked at what I was doing but it's just for fun. I would never actually do anything to harm Coco.

"I've never seen anything like it before so maybe that's why it shocked some people.

Maritza adopted five-year-old Coco after she was abandoned in a box outside her mother's shop and now tries to give her the best life possible.

Following the social media success, the dog-lover plans to launch a collection of false nails for dogs, which cost £10.80 ($15 USD).

She added: "So many people were requesting them so I decided to create a collection that other people and dogs can enjoy, but I've stressed that they're just a prop.

"I've always loved animals and I decided to donate a portion of the sales to an animal rescue organisation, in ode to Coco."