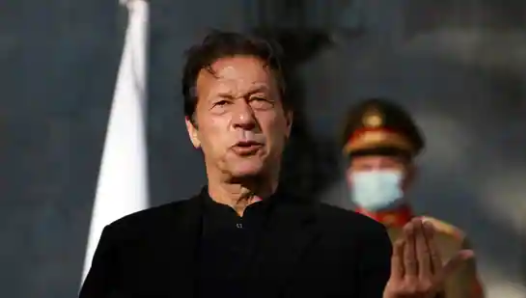 A protest erupted here against Pakistan Prime Minister Imran Khan, demanding a public apology from him for his statement blaming "vulgarity" in society for rape and sexual violence.

The demonstration was organised on Thursday by Rights activist and civil society representatives outside the National Press Club here, Pakistan's News International reported.

The protestors criticised Khan for what they called "victim-blaming" and called for an apology for the comment he made during a question and answer session with the public when he was asked for suggesting a solution to rising child abuse cases in the country.

The protestors were holding placards and banners inscribed with their demand for an apology and said that such statements would encourage rapists.

"It can be considered an opinion when a common person says such thing but if a prime minister makes such comment, it becomes a policy statement. We cannot ignore such a statement which puts the burden of such crimes on the way women dress up. It is a dangerous statement for women like us who work in offices, fields and factories," said one protestor.
Last week, Khan has blamed "fahashi" (vulgarity) for surge in rape and sexual violence instead of the deteriorating law and order situation in the country.

As he took calls from the people on Sunday, Khan -- when asked by a caller what the government plans to do in the light of rising incidents of rape and sexual violence, especially against children -- said that there are some fights that governments and legislation alone cannot win and that the society must join in the fight. He said it was important for societies to protect themselves against "fahashi" (vulgarity), reported Geo News.

The prime minister said incidents of rape and sexual violence that make their way to the media are just one per cent of the actual horrific crimes of such nature that take place.

Khan said when he went to the UK, during the '70s to play cricket, the "sex, drugs and rock n roll" culture was taking off. He said nowadays, divorce rates "have gone up by as much as 70 per cent due to vulgarity in that society". He said the whole concept of 'pardah' (or covering up, or modesty) in Islam has a purpose to it which is to "keep temptation in check".

His remarks sparked outrage in the country where women are subjugated and deprived of basic rights like educations.

Human rights activist Tahira Abdullah said this outrage against Khan's statement is because he was asked about rise in child abuse cases but in response, he started blaming the rise in vulgarity and lack of 'pardah' among women for such incidents. "If these are the reasons then why dead women, animals and children get raped in our society," she asked.

She demanded the Prime Minister to take his words back and apologise.

Official statistics in Pakistan have revealed that at least 11 rape incidents are reported in the country every day, with over 22,000 cases reported to the police in the last six years.

However, only 77 of the accused have been convicted which comprises 0.3 per cent of the total figure, reported Geo News.

Moreover, in February, in an insensitive move, the Forensics Department of Khyber Medical College University proposed a plan to charge rape victims Pakistani ₹25,000 for medical examination and ₹5,000 for an autopsy for the local residents of Peshawar.