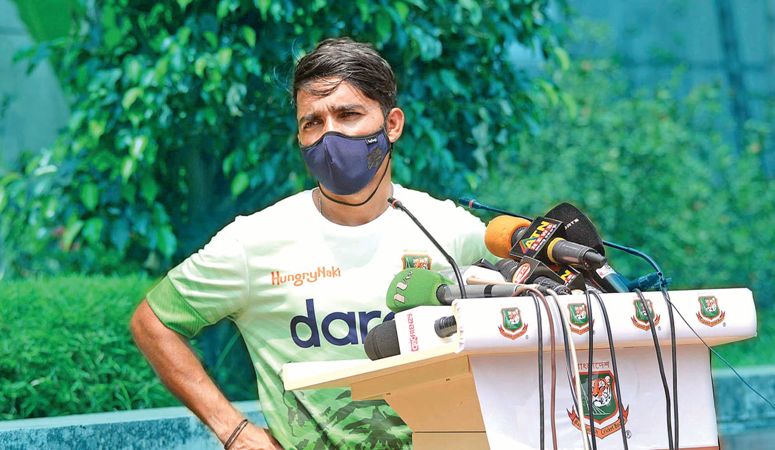 Bangladesh Test skipper Mominul Haque on Sunday felt that their preparation for the upcoming two-match Test series against Sri Lanka was not up to the mark but he was hopeful that they would get prepared before the series gets underway.

Several Bangladesh Test cricketers like skipper Mominul, Abu Jayed, Taijul Islam, Nayeem Hasan recently competed in the first two rounds of the National Cricket League but the majority of players were busy with the limited-over series against New Zealand in New Zealand.

“I won’t say the preparation was very good,” Mominul told reporters at the National Cricket Academy premises in the capital.

“I feel the cricketers, who played the four-day matches, have some preparation but those, who played in white-ball will play in the format after a while. They have to adapt mentally with the format and I’m sure they can do it,” Mominul added.

Bangladesh had only one net session ahead of the Test series at home on Sunday at the Sher-e-Bangla National Stadium while they are expected to depart for Sri Lanka today on a chartered flight.

The Tiger can only come out of their room in Sri Lanka on April 15 after completing three-day room quarantine.

The tourist team will play a two-day intra-squad warm-up game which is scheduled on April 17-18 at CMC, Katunayake.

The first Test will be played from April 21-25 while the second game will be held from April 29-May 3, with both games to be played at Pallekele International Cricket Stadium in Kandy.

Mominul emphasised on their batting unit that he felt should click in Sri Lanka in order to get the result in their favour while he said that they won’t make experiments in the island nation.

“There will be sporting wickets in Sri Lanka and if you see the batting unit failed in the last couple of series. So they must step up and perform if we want to earn success in Sri Lanka,” he said.

“We need to have a result because we have failed in the last five to six Test matches. Unless you are winning you can’t experiment and you have to understand when to experiment. There is no point experimenting in Sri Lanka,” he added.

Mominul backed the pacers in the squad and said that he is looking to groom a pace unit.

Bangladesh Cricket Board decided to send additional bowlers to Sri Lanka as they won’t be provided with any net bowlers for their practice sessions while the wicket at Pallekelle International Cricket Stadium is known to assist the pacers.

However, if the recent trend of Bangladesh is taken into account, taking so many pace bowlers is nothing short of a surprise considering the reluctance of the team management to back them and often receives criticism for it.

The Tigers played with only one pace bowler in both of their last two Tests against West Indies.

“If you look at the last four to five series, I feel that you will agree with me that pace bowlers did a good job along with the spinners and I am happy. Look if the wicket permits, I can play two, three or four pace bowlers,” said Mominul.

“We are keeping pace bowlers in a process as our back-up and we’re not making any short term plan. I feel if we look into the future we need to have six to seven pace bowlers,” he added.

Mominul added that he is not worried about the absence of Shakib Al Hasan and Mustafizur Rahman in the Test series and added that he is preparing mentally to lead the side without one or two cricketers in the coming days.

Both the players are currently in India to take part in the Indian Premier League.

“I don’t think the team will not perform without Shakib and Mustafizur because there are other cricketers. They don’t have 10 to 12 hands,” said Mominul.

“I don’t think their absence will have any impact. It’s just that we’re not performing as a team and so we failed to achieve any result, nothing else,” he added.