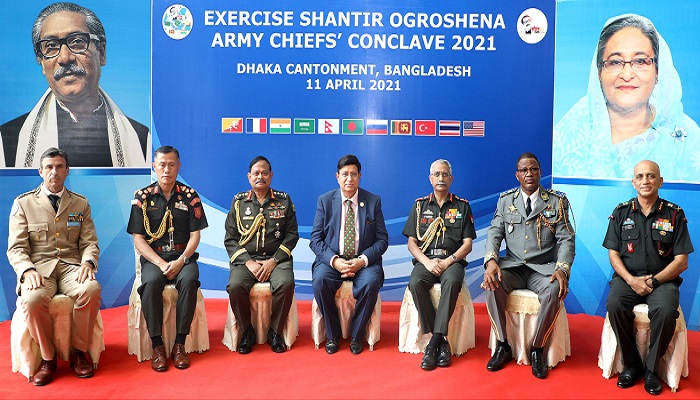 An International seminar titled ‘Army Chief's Conclave’ with the participation of local and foreign military and civilian dignitaries was held at the Multipurpose Complex in Dhaka Cantonment on Sunday.

Bangladesh Army organized the seminar. The main topic of discussion at the seminar was ‘Future Trend of Global Conflict: Role of UN Peacekeepers.’

On the occasion of the birth centenary of Father of the Nation Bangabandhu Sheikh Mujibur Rahman and the golden jubilee of Bangladesh's independence, the seminar was organized as part of the ‘Shantir Ogroshena’, a multinational military exercise, to commemorate the contribution of the Father of the Nation in the establishment of world peace.

Foreign Minister Dr AK Abdul Momen, MP was present as the Chief Guest on the occasion.

In his speech, Army Chief General Aziz Ahmed said that UN peacekeeping operations are becoming increasingly challenging and complex due to the rise of non-state actors, use of sophisticated technology, political crisis and changing geopolitical and geo-strategic positions.

He stressed on enhancing the capabilities of peacekeepers through timely training, community-based information sharing, use of advanced technology, revision of the UN Charter and institutional framework to meet the challenges of the day.

Dr AK Abdul Momen highlighted Bangladesh’s commitment to maintaining peace and stability in the world. He said the nature of peacekeeping has changed due to the use of advanced technology and sophisticated weapons, the misuse of social media and the ongoing global epidemic.

He expressed the need for meaningful mutual cooperation, increased participation of women and development of health-related emergencies to meet the challenges posed by this unprecedented global epidemic.

The seminar was attended by senior officials of Navy and Air Force and Bangladesh Police, diplomats, senior editors and journalists.

The participants and guests of the seminar exchanged views on the role of UN peacekeepers in dealing with various conflicts in the world in the coming days and the establishment of world peace.

On the occasion of the birth centenary of Father of the Nation Bangabandhu Sheikh Mujibur Rahman and the golden jubilee of Bangladesh's independence, the seminar organized by the Bangladesh Army, one of the main contributors to the UN peacekeeping mission, is expected to play a significant role in establishing global peace in the future.