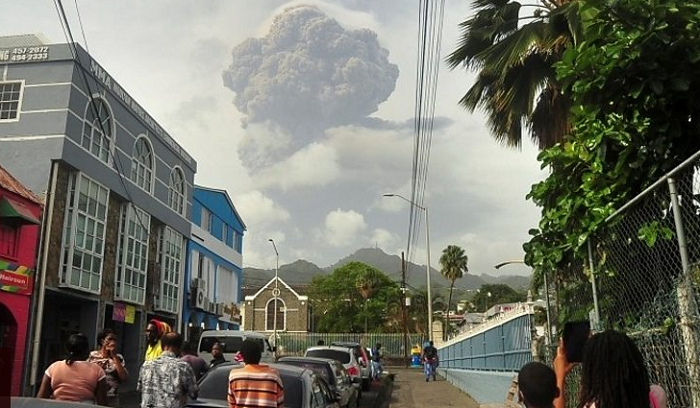 There has been another "explosive event" at a volcano on the Caribbean island of St Vincent, with power outages and water supplies cut off.

The La Soufrière volcano first erupted on Friday, blanketing the island in a layer of ash and forcing some 16,000 people to evacuate their homes.

Residents in Barbados, nearly 200km (about 124 miles) to the east, have also been urged to stay indoors.

Scientists warn that eruptions could continue for days - or even weeks.

White-coloured dust has covered buildings and roads around the island, including in its capital Kingstown.

How are residents coping?
Nemo is urging people to "be careful on the roads, which have become treacherous as a result of the ash flow".

Prime Minister Ralph Gonsalves said water supplies to most of the island had been cut off and its airspace closed because of the smoke and thick plumes of volcanic ash moving through the atmosphere.

Mr Gonsalves said thousands of residents had been sleeping in emergency shelters since Friday. "It's a huge operation that is facing us," he told NBC News.

He said earlier that a lot of volcanic ash had fallen over the sea. "We don't know how much more is going to come out... so far, we have done well in that nobody got injured, nobody is dead."
The Barbados Defence Force has been deployed to St Vincent to provide humanitarian assistance as part of a disaster response mission, the Caribbean Disaster Emergency Management Agency said.

Homes across the island, which has a population of around 110,000, have been covered in white-coloured volcanic dust and rock fragments.

It prompted warnings from officials to stay indoors, while emergency groups advised caution for those suffering with respiratory problems.

"Be careful all. We are covered in ash and strong sulphur scents pervade the air. We ask that you take the necessary precautions to remain safe and healthy," Nemo said.