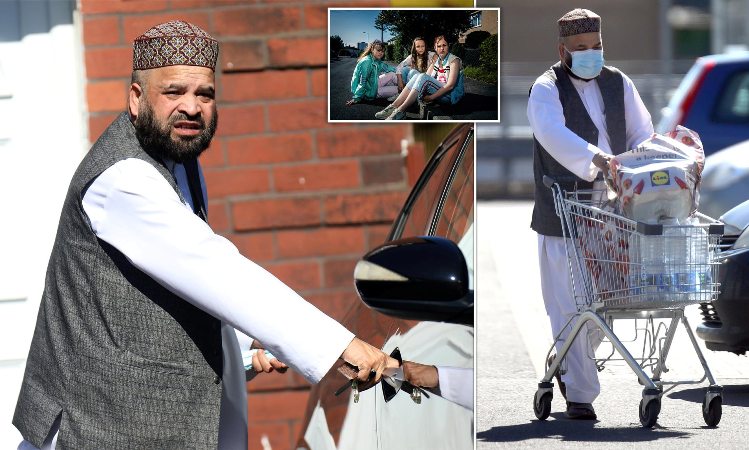 A convicted Rochdale grooming gang leader says he does not expect to be deported for his crimes - in a kick in the teeth to the scandal's victims.

Qari Abdul Rauf, 51, was warned he would be sent back to Pakistan more than six years ago after serving a prison sentence for his offences.

But it emerged this week that he is still living freely in the Greater Manchester town, to the fury of his victims, campaigners, and local residents.

Speaking today for the first time since his presence back in Rochdale was revealed he arrogantly admitted that even he is surprised that there has not been any move to get him out of Britain.

Asked by MailOnline if he was surprised he had not been deported, Rauf admitted: 'Yes'. When pressed again if he expected to be removed soon, he added: 'No I don't think so'.

The Muslim preacher, who has been seen shopping in Rochdale, then jumped in his car and left his semi-detached home.

'You see children playing in the street by his home and I don't understand why he hasn't been removed.

'I don't feel safe with him here.'

'Former police officer Maggie Oliver, 65, who quit Greater Manchester Police over its lack of action over the scandal, said the sight of Rauf 'made her blood boil'

She said: 'The victims have been treated disgracefully and he is carrying on as if he's done nothing wrong.

'The public and the victims see the criminal justice system failing them. Sadly it does not surprise me he hasn't been deported.'

Rauf was jailed in 2012 for the scandal which was later dramatised in the BBC drama 'Three Girls'.

He got six years after being convicted of conspiracy to engage in sexual activity with children under 16 and trafficking for sexual exploitation.

But he was freed on license in November 2014 after just two and a half years in prison.

He then returned home to his wife and five children.

The Home Office told him he would be stripped of his UK citizenship in 2015 and returned to his native Pakistan with fellow abusers Abdul Aziz, 50, and Adil Khan, 51.

He lost an appeal in 2018 against the ruling to strip them of their citizenship rights but it's understood he still has the right to a further appeal against deportation before it can be enforced.

A Home Office spokesman said the case had been reviewed recently and that it 'intends to update the victims through the proper channels when we can.'