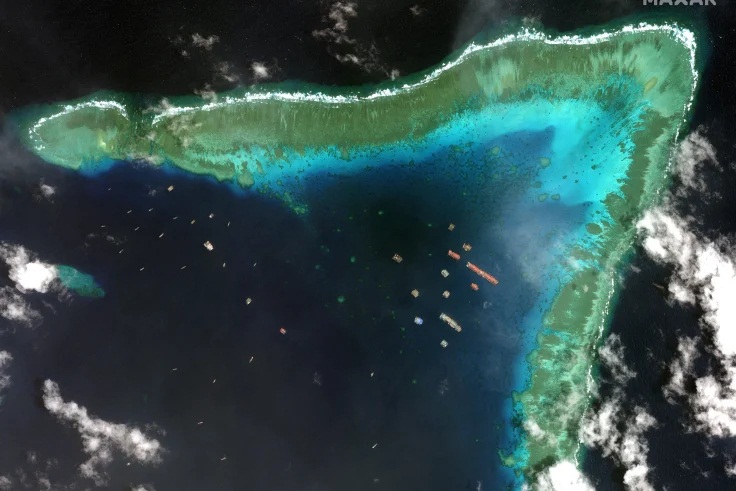 The Philippines has threatened to expel a Chinese diplomatic spokesman in Manila in the latest twist of an intensifying row with the superpower over territory in the South China Sea.

The Defence and Foreign Affairs ministries in the Philippines have been up in arms for a fortnight over the presence of 220 fishing boats suspected to be manned by Chinese maritime militia at Whitsun Reef, with statements flying back and forth over the alleged incursion into the Philippines’ exclusive economic zone.

With dozens of the vessels remaining in the area, Secretary of Foreign Affairs Teddy Locsin jnr said on Wednesday he was “firing off another diplomatic protest” to China’s embassy and would continue objecting “every day until the last one’s gone like it should be by now if it is really fishing”.

The Philippines has had its navy patrol near the disputed reef in the Spratly Islands since the discovery of the Chinese flotilla last month and has rejected China’s claims they are merely fishing boats, with Defence Secretary Delfin Lorenzana saying they represented an utter disregard for international law and revealed China’s “intent to further occupy features in the West Philippine Sea”.

Lorenzana also announced on Tuesday that he has COVID.

Philippine fishing federation Pamalakaya on Wednesday also slammed the presence of the Chinese ships at the reef and China’s claims they were sheltering from bad weather.

“It’s been a month of perfectly fair weather and yet these Chinese vessels purportedly seeking shelter from rough seas are still in our waters,” it said. “We demand China get out of Philippine waters as they have no right to overstay here.”

There is also anger in Manila about a Chinese embassy official there publicly labelling Lorenzana’s comments on the dispute as “unprofessional” and, in a development that would further escalate the standoff, a Philippine foreign affairs official indicated the government was considering throwing him out.

“Normally, this is part of the range of diplomatic courses of actions, but I have no confirmation yet,” Foreign Affairs Executive Director Ivy Banzon-Abalos said.

China is showing no sign of budging. It accuses the Philippines of using a 2016 international tribunal ruling, which found no legal basis to its claims to most of the South China Sea inside its nine-dash line, to “deny the thousand years of fishing rights of the Chinese fishermen in the area”.

“We urge the Philippine side to objectively and rationally view the matter, stop hyping up and stop bringing negative influence to the South China Sea situation.”

There was another warning from Chinese Communist Party mouthpiece, The Global Times, whose editor Hu Xijin said in video on its website that the Philippine military “should not act rashly other than making some noise”.

“Otherwise, China will definitely give a strong response,” he said.

The Philippines has been supported by the United States in its stance on the Chinese vessels and Australia’s ambassador in Manila, Steven Robinson, also said last week he was “concerned about any destabilising actions that could provoke escalation in the South China Sea”.

Amid the ongoing tension, the Philippines is relying heavily on Chinese vaccines as it confronts one of the worst outbreaks of COVID-19 in south-east Asia. Infection rates have surged in the past three weeks including a daily record of 15,298 positive cases on April 2 and like other countries in the region the Philippines has been hampered by a delay in the supply of the vaccine. Rodrigo Duterte’s government has purchased 25 million doses of Chinese Sinovac but only 2 million have arrived.

Duterte, who has sought closer economic ties with China since he was elected President in 2016, has been more measured in his public commentary on the new South China Sea feud and his spokesman said on Tuesday it would not affect the nation’s access to Chinese vaccines.

“Whatever differences we have with China will not define our bilateral relations,” spokesman Harry Roque said on behalf of Duterte.

“It will not be an obstacle to the overall positive trajectory of our bilateral friendly relations and our deepening co-operation in pandemic response including vaccine cooperation and in post pandemic economic recovery.”