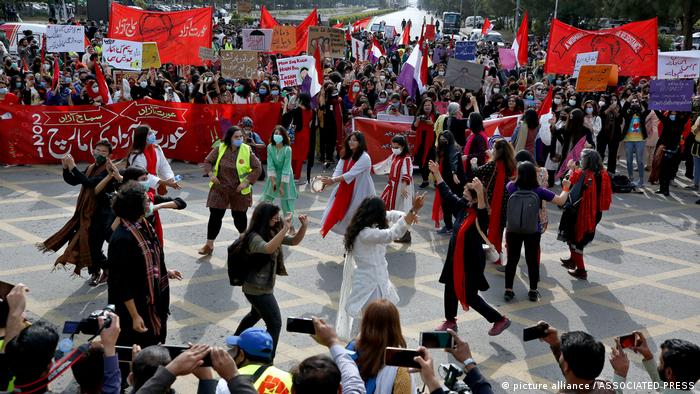 While organizers of Pakistan's Women's Marchhave long been the subject of threats and criticism, allegations of blasphemy could put women's rights activists in a new kind of danger.

Blasphemy accusations have resulted in killings in the past, and human rights activists believe that these allegations have created a widespread climate of fear, especially for women's rights advocates.

"Pakistan is not a democratic state but a religious state where clerics wield a lot of influence," Mehdi Hassan, a former chairperson of Pakistan's Human Rights Commission, told DW.

"Hurling allegations of blasphemy amounts to jeopardizing the lives of people here. We fear that the lives of women activists are in danger because there are so many extremists out there in the streets who could target them at any time."

"At least seven people have been killed just because of blasphemy allegations. Therefore, it is important that the government provides them [the activists] with protection."

Who is threatening activists in Pakistan?

At least two local courts — one in the northwestern city of Peshawar and another in the southern port city of Karachi — have asked police to register cases against organizers of the march, alleging violations of blasphemy and other laws. A petition seeking to ban the annual gathering has also been lodged with the Islamabad High Court.

Lahore-based activist Shazia Khan said friends and relatives have pressured them to maintain a low profile following the accusations and legal cases.

"Hatemongers and misogynistic media personalities have been spewing venom against us, jeopardizing the lives of women in a country where people are killed merely due to false accusations of blasphemy," said Khan.

Khan believes it is difficult to say who is behind these threats and litigation.

"However, the individuals and organizations that are issuing threats or registering cases are believed to have worked for the intelligence agencies in the past, or to have their support."

"All the videos and posters have been fabricated or doctored. There is no truth to these accusations," prominent activist Farzana Bari told DW.

Organizers of the march have also written an open letter to Prime Minister Imran Khan in order to draw his attention to the threats.

Why is Women's March targeted?

Some prominent right-wing TV anchors and media personalities have also spoken out against the leaders of the march, accusing them of spreading Western culture.

"Blasphemous slogans were used during the Women's March," Ibrar Hussain, who filed a case against the activists, with a local court in Peshawar, told DW.

"I went to a police station to register a case, but my application was rejected, so I approached the court and now the court has ordered the police to register a blasphemy case," said Hussain.

Meanwhile, Hafiz Ihtisham, who is associated with Islamabad's "Red Mosque," told DW that "blasphemy" was committed against "holy personalities."

"Religious personalities were also insulted," he said. "I approached the court, seeking an action against the organizers of the march, and a permanent ban on the event. I have also requested that the court probe the funding sources of the NGOs that hold the event," he added.

Although Women's Day is celebrated in Pakistan on March 8 every year, it has assumed a greater significance since the Women's March was launched in 2018 by the Women Democratic Front and the left-wing Awami Workers Party

The event has triggered a debate over women's rights in Pakistan, where thousands of cases of honor killings, domestic violence, sexual assaults and harassment against women are reported each year.

Women are also widely discriminated against in workplaces, political institutions and social gatherings. In particular, the march's slogan, "my body, my control"  earned the ire of conservative elements of society.

This year, even the terrorist outfit Tehreek Taliban Pakistan publicly threatened the organizers on Twitter, much to the alarm of women's rights activists.

The tweet said, "Fix your ways. There are still many young Muslims here who know how to protect Islam and the boundaries set by Allah."

Yasmin Lehri, a female politician and leader of the National Party, believes that women could also be harmed while attending court hearings. Lehri said that the government should provide full protection to women's rights activists and look into the accusations before registering the cases, due to the dangers posed to those attending the hearings.

However, despite the dangers, government officials have said the march organizers should face the charges.

"This is really very disturbing … All possible methods should be employed to probe these accusations," said Lehri. "And if the videos and posters turn out to be fake, then those who leveled the accusations must be brought to justice."