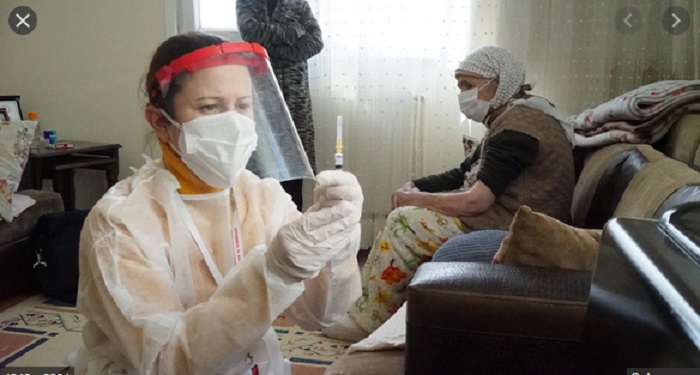 Thanks to Chinese-made vaccines, Turkey has mounted one of the fastest coronavirus vaccination campaigns in the world, administering at least one dose to almost 18 million people, more than a fifth of its population, according to the Health Ministry.

But the vaccination drive has stumbled of late, after what Turkish doctors and officials said were delays in shipments from China’s Sinovac pharmaceutical company.

Last week, parts of Turkey’s robust vaccination network all but ground to a halt as hospitals and clinics were forced to turn away patients, according to Sebnem Korur Fincanci, president of the Turkish Medical Association.

It was not the first time patients had been turned away recently because of a lack of doses, she said.

Turkey’s frustrating struggle to obtain vaccine doses is the latest illustration of the outsize influence China has on the fate of nations battling the pandemic.

China’s export of millions of vaccine doses has provided a lifeline to dozens of developing countries that have had difficulty obtaining Western vaccines and has helped project Beijing’s sway through “vaccine diplomacy.”

But China’s largesse has come amid concerns from health officials in some of the countries it supplies about the efficacy of its vaccines and questions by industry analysts about whether its production capacity will be able to keep pace with an ever-expanding list of overseas customers — and the massive vaccination campaign it is only beginning to mount at home.

Egypt has received only a tiny percentage of its vaccine order from China, according to statements by Egyptian government officials. Chile, on the other hand, has received millions of Chinese doses, making it a world leader in vaccinations. Health officials in Brazil, which has the second-highest number of confirmed covid-19 deaths in the world, have pleaded with China to send more vaccine doses. And Turkey says it just wants what it was promised.

Turkish President Recep Tayyip Erdogan’s government ordered 20 million doses of China’s Sinovac vaccine last fall, betting big on what was then an experimental drug before eventually ramping up the order to 100 million doses. But delayed shipments have forced the government to repeatedly revise its vaccination timetable at a time when infections have soared to record highs.

During a visit to Turkey late last month by China’s foreign minister, Erdogan took the unusual step of going public with his government’s frustrations. He scolded Beijing, a key trading partner, for not delivering even the first promised tranche of the vaccine order, 50 million doses, which “should have reached us by the end of February,” he said.

“This is not enough,” Erdogan told reporters, recalling his conversation with Wang Yi, the foreign minister. “We have an agreement for 100 million between us.” A spokesman for Sinovac did not respond to a request for comment on why shipments to Turkey were delayed.

Turkey has maintained a delicate balance with China over the past few years, toning down its criticism of Beijing’s crackdown on Muslim Uyghurs as Ankara seeks Chinese investment for its hobbled economy — and, more recently, vaccine doses.

A Turkish official said that the shortages had not yet affected relations between the two countries. But “if China overpromises, in the future they may be more cautious,” added the official, who spoke on the condition of anonymity to discuss sensitive diplomatic ties.

In distributing vaccine doses abroad, China is only slightly behind India, which last month announced it was temporarily banning exports amid political criticism of vaccination efforts at home.

While there is no definitive list, the Atlantic Council, citing government reports, said late last month that China had sent 60 percent of its production of Sinovac and Sinopharm vaccines as aid to 53 countries and paid exports to 27.

Chile, for example, has been able to carry out its successful vaccination drive in part as a result of its early acquisition of China’s Sinopharm vaccine. In recent weeks, China has also supplied hundreds of thousands of vaccine doses to Iran and the Palestinian Authority.

China’s approach contrasts with that of the United States, where the Biden administration has said the first priority is vaccinating Americans. Its only export has been a promised “loan” of stockpiled AstraZeneca vaccine — 2.5 million doses to Mexico and 1.5 million to Canada — that the Food and Drug Administration has yet to approve for U.S. use.

In some countries, appreciation for Chinese shipments has come with suspicion. In Turkey, the shortages have fueled rumors that China was delaying vaccine shipments to pressure Ankara to extradite Uyghurs living in Turkey to China, though Turkish and Chinese officials have denied any such pressure.

In January, China’s ambassador to Brazil was forced to explain that delayed vaccine shipments at the time were due to technical reasons and not retribution for President Jair Bolsonaro’s anti-China rhetoric.

China’s efforts have also been hampered by the refusal of its pharmaceutical companies to release data on the efficacy of their vaccines. Doctors in Turkey said that Sinovac’s vaccine has been effective in reducing hospitalization and that they had encountered little public skepticism over the safety of the shots.

There has been far more consternation over vaccine shortages as the pandemic worsened.

A new coronavirus vaccination ward at the hospital can accommodate more than 800 people a day and double that when combined with room in adjacent buildings, he said in an interview at the hospital last month.

But on the day he spoke, only 40 people were scheduled to be vaccinated, including health-care workers and people over 65.

Because people need to receive second doses, vaccine doses were being rationed, preventing the vaccination campaign from moving on to other vulnerable groups, Yiyit said.

The country had fallen “a little bit behind” in its vaccination schedule plan, which at one point aimed to administer 105 million vaccine doses by the end of April, he added.

As infection rates and death tolls have spiked in the past few weeks, Turkish officials have taken pains to show they are trying to find alternatives to Sinovac. Several domestic vaccines are in development, and health officials recently announced they had procured more than 4 million doses from Pfizer and were on the verge of concluding deals with other unnamed sources.

Turkey has the “capability to vaccinate a million people a day,” said Korur Fincanci, the Turkish Medical Association president. “But we are dependent on the countries who produce the vaccines.”