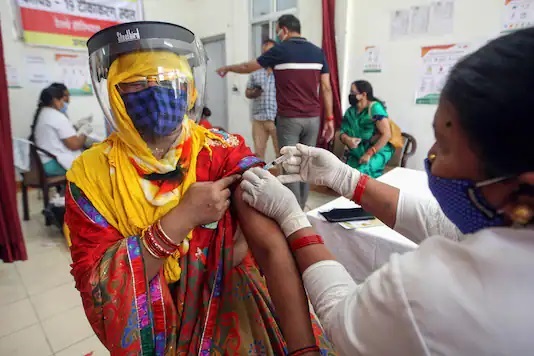 India has administered more than 90 million doses of coronavirus vaccines amid a deadly second wave of infections.

The country has been reporting an average of more than 90,000 cases of Covid-19 every day since 1 April.

Everyone above the age of 45 is now eligible for jabs, which are available at vaccination centres and hospitals.

Most of the doses have been given so far to frontline workers and people above the age of 60.

However, the world's largest vaccination drive appears to be struggling. This week, half a dozen states have reported a shortage of doses even as the federal government insists that there's enough in stock.

The government claims the "allegations" of vaccine scarcity are "utterly baseless" and it has more than 40 million doses in stock.

The inoculation drive aims to cover 250 million people by July, but experts say the pace needs to pick up further to meet the target.

The third phase - which began on 1 April - opened amid a sharp uptick in Covid-19 cases.

On 4 April, India became the second country after the US to report 100,000 new cases in a single day. More than half of those were confirmed in Maharashtra, which has India's largest city Mumbai as its capital.

India's caseload had dropped sharply by the time it began vaccinating people early this year. It was adding under 15,000 infections daily. But cases began to spike again in March, largely driven by poor test-and-trace and lax safety protocols.

Experts say India's second wave is being fuelled by people being less cautious - and mixed messaging by the government.

Since the pandemic began, India has confirmed more than 12 million cases and over 167,000 deaths. It's the third-highest number of Covid-19 infections in the world after the United States and Brazil.