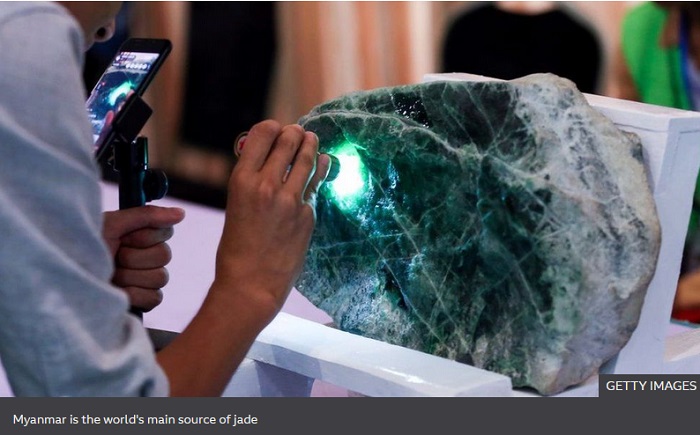 The US Treasury Department has imposed sanctions on a Myanmar state-owned gems enterprise, in a bid to deprive the military government of funds.

The Treasury described Myanmar Gems Enterprise (MGE) as "a key economic resource" for the military regime.

Myanmar is the world's main source of jade and a major source of rubies, sapphires and other gems.

The US had already sanctioned three other gemstone companies it said were connected to the country's military.

The US and UK also previously ratcheted up sanctions on the military and on coup leaders.

It comes after the military seized power in a coup on 1 February, sparking protests from pro-democracy activists.

Around 600 civilians have been killed, and thousands arrested as government forces respond to demonstrators with increasing violence.

The move blocks Americans from doing business with the entity, which is a state-owned enterprise operating under the Ministry of Natural Resources and Environmental Conservation.

How significant is MGE?

A 2019 UN report on the economic interests of the Myanmar military said it was among a number of state-owned enterprises that "play a dominant role in Myanmar's economy, generating about half the government's revenue, spending half the government's budget and regulating much of the formal economy".

A previous report from Global Witness put the estimated value of Myanmar's jade at $31bn (£22bn) in 2014, based on the officially recorded jade production figures of 16,684 tonnes.

The Extractive Industries Transparency Initiative's most recent statistics, from 2018, suggest that jade production has roughly doubled since then.

The body recently suspended its operations in Myanmar in response to the coup.

What else do we know about the jade industry?

A great majority of jade comes from the Kachin state, along the Chinese border, where there has been a decades-long conflict between the government and insurgents seeking more autonomy.

Jade is thought to fund both sides of the conflict, according to Global Witness.

Jade mining is also not without its risks.

Last year, 162 workers at a jade mine died when heavy rains triggered a landslide. The industry has also previously been linked to labour rights abuses.