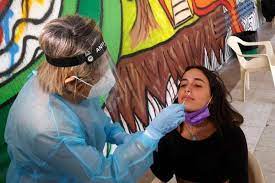 As the world witnesses the worst of the pandemic, the overall number of global Covid cases has now surged past 133mmillion. The death toll from the virus is also fast nearing the grim milestone of 3 million.

According to Johns Hopkins University (JHU), the total case count reached 133,808,161 while the death toll from the virus mounted to 2,901,072 on Friday morning.

In the US, nearly half of new coronavirus infections are in just five states -- a situation that is putting pressure on the federal government to consider changing how it distributes vaccines by sending more doses to hotspots, reports AP.

New York, Michigan, Florida, Pennsylvania and New Jersey together reported 44% of the nation’s new Covid-19minfections, in the latest available seven-day period, according to the state health agency data compiled by Johns Hopkins University.

The Texas Department of State Health Services reported 3,177 new cases, a figure below the state’s seven-day rolling average of 3,314 as computed by Johns Hopkins University researchers. That pushed the state’s pandemic total increased to 3,022,708 with the addition of 1,522 previously unreported Covid-19 cases. The state estimated 65,587 were active.

Brazil on Tuesday registered a record 4,195 deaths from Covid in a single day, taking the accumulated pandemic toll to 336,947, the Ministry of Health said.

The coronavirus pandemic started 2021 in the midst of its deadliest phase yet. As the effects of unheeded holiday travel warnings set in and more contagious variants of the virus took hold, parts of North and South America, Europe and the Mideast saw record confirmed cases and deaths in January, reports AP.

Halfway through the first month of the year, the worldwide death toll reached 2 million. Virus-related deaths in the U.S. surpassed 400,000 four days later and hit 500,000 a little more than a month after that. National lockdowns and extended bans on international travel were reimposed as infections climbed again, replaying scenes from the early months of the crisis.

More than 47% of the 190 countries providing ongoing epidemiological data reported increases in the 7-day rolling average for new cases between the end of February and the beginning of March. More than one-third showed Covid19 deaths on the upswing.

The pandemic, which had been tamed in some places over the summer before roaring back in the final months of last year, still could be more lion than lamb as spring approaches.