Bangladesh, US to work together to address climate change 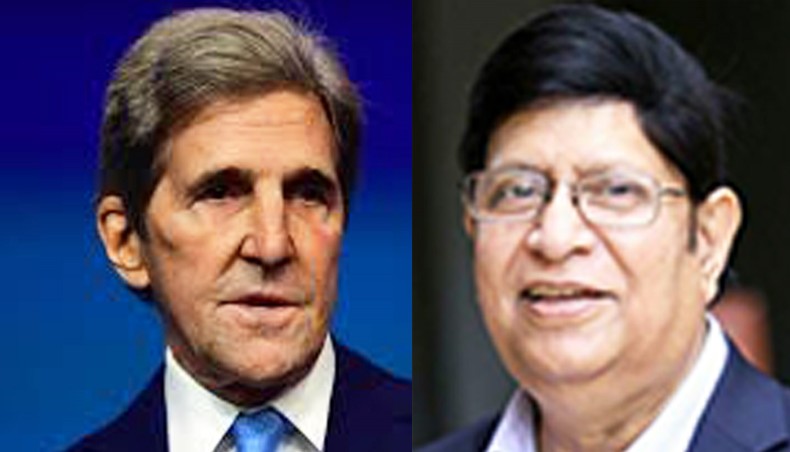 Foreign Minister AK Abdul Momen sought US support for increasing global climate ambition and commitment to accelerate implementation of the Paris Agreement during his meeting today with the US Special Presidential Envoy for Climate John Kerry.

During the meeting, the Foreign Minister recalled United States’ crucial role to the successful adoption of the Paris Accord and appreciated Biden government’s decision to return to the global climate negotiations which would create momentum to advance global climate progress.

He also referred to the crucial contribution of Mr. Kerry for concluding the Paris Accord in 2015, and mentioned that Bangladesh had closely worked with the US delegation at that time. He expressed hope that under the leadership of the US, the developed countries would come forward with ambitious actions to limit the global warming at 1.5 degree Celsius.

He further added that Bangladesh was reviewing the potential to enhance its mitigation ambition to submit a quantified ambitious NDC (Nationally Determined Contribution) by June 2021. Bangladesh submitted an interim NDC on 31 December 2020.

John Kerry highly appreciated Bangladesh’s excellent adaptation and mitigation efforts. He said that Bangladesh had shown amazing resilience to climate change despite many adversities.  He also praised Prime Minister Sheikh Hasina for her leadership in the Climate Vulnerable Forum (CVF).

While discussing about the upcoming COP26 in Glasgow in November this year, Foreign Minister Momen reiterated the significance of the promised international financial flow at and beyond US$100 billion annually to support sustainable development and energy transformations of the developing economies, and he stressed that the funding should be distributed at 50:50 ratio between mitigation and adaptation.

He also mentioned at the same time that adaptation without mitigation is not a good strategy. On the issue of the national determined contribution (NDC), Foreign Minister Momen emphasized on behalf of Bangladesh as well as on behalf of the CVF that all countries need to work hard to fulfill their NDCs at the soonest.

He also requested for high level presence from the U.S. government at the CVF-COP26 event, planned to be held on the sidelines of the COP26 to secure a recovery package for the climate vulnerable countries.

Momen said that Bangladesh has emerged as a global leader in climate change adaptation which was possible for systematic investment in the adaption measures.  He further raised the issue of “loss and damage” due to climatic events, including displacement of people from river erosion, sea level rise and increasing of salinity in the coastal areas.

While discussing bilateral cooperation in the area of climate change, Foreign Minister Momen requested for US support in renewable energy, including investment from the US companies in the renewable energy sector of Bangladesh.

Foreign Minister Momen also requested for US assistance in afforestation. He sought support for reconstruction and widening of embankments around the rivers to stop erosion, and also afforestation along the embankments, and in the Southern region of Bangladesh.

The issue of rehabilitation of the population displaced because of river erosion and also from the coastal areas because of the sea-level rise was discussed, and Foreign Minister sought US support in this regard.

Momen also informed Kerry that on the occasion of the birth centenary of the Father of the Nation Bangabandhu Sheikh Mujibur Rahman, the Government has planted 11.5 million trees, and in total around 30 million trees are being planted all over Bangladesh this year.

Foreign Minister informed about the establishment of the regional office of the Global Centre for Adaptation (GCA) in Dhaka in October 2020 for sharing of local adaptation strategies in the region, and asked for US support for the Centre.

After these two meetings, a joint press briefing was held where John Kerry and Foreign Minister Momen met the Press.

After the meetings and the press briefing at the State Guest House Padma, Mr. Kerry called on the Prime Minister Sheikh Hasina at the Ganabhaban. The call on lasted for more than one hour.

US Special Presidential Envoy John Kerry has visited Bangladesh today regarding invitation by the US President Joseph Biden to Prime Minister Sheikh Hasina for the U.S. hosted Leaders Summit on Climate to be held virtually on 22-23 April 2021 and to have discussions on increasing climate ambition ahead of the Leaders Summit and the 26th Conference of the Parties (COP26) of the UNFCCC.