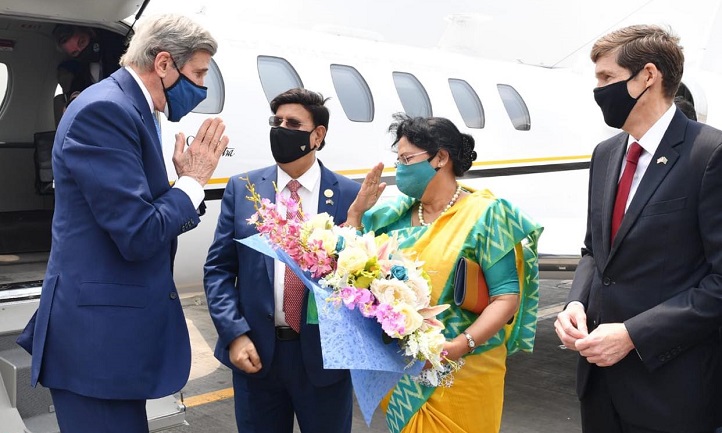 United States Special Presidential Envoy for Climate John Kerry has arrived in Dhaka as part of his first Asia tour, for consultations on increasing climate ambition ahead of a climate summit that Washington will host this month.

Foreign Minister Dr. A. K. Abdul Momen and his wife Selina Momen received John Kerry at 11:30am on Friday at Hazrat Shahjalal International Airport in the capital. US Ambassador to Bangladesh Earl R Miller was also present during the occasion.

US President Joe Biden will host Leaders Summit on Climate on April 22-23 and the 26th Conference of the Parties (COP26) to the United Nations Framework Convention on Climate Change later this year.

The US President has invited 40 world leaders, including Prime Minister Sheikh Hasina, for a virtual leaders' two-day summit on climate starting from April 22.

Prior to visit Bangladesh, Kerry travelled to UAE and India beginning April 1 when he tweeted "Looking forward to meaningful discussions with friends in the Emirates, India, and Bangladesh on how to tackle the climate crisis".

Kerry will call on Prime Minister Sheikh Hasina and will hand over the US President’s invitation to the Bangladesh Prime Minister in person to attend the "Leaders Summit on Climate" to be held on April 22-23.

Official sources said during meetings with John Kerry, Dhaka will its priority issues on the climate front and share the initiatives Bangladesh has already taken.

He is expected the meet the Minister for Environment and NGO representatives working in the field of climate change.

Kerry will call on Prime Minister Sheikh Hasina in the afternoon and is scheduled to depart Dhaka at 6pm Friday.