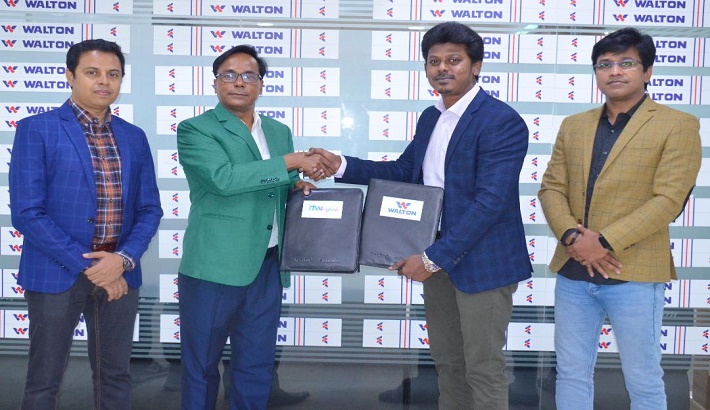 Release Bangladeshi tech-giant Walton has become the title sponsor of the upcoming test series between Bangladesh and Sri Lanka. The official name of the event will be ‘Walton Bangladesh-Sri Lanka Series’.

On Monday (April 5, 2021) a memorandum of understanding (MoU) was signed between the authorities of Walton and ITW sports management, the owner of the series.   Walton   Group   Executive   Director   Uday   Hakim   and   head   of   ITW Consulting Bangladesh Private Limited Mohammad Sharik signed the agreement on behalf of their respective organizations at Walton’s media office in Dhaka.Walton’s Executive Director Firoj Alam and Senior Additional Director RabiulIslam Milton witnessed the signing program.

Uday Hakim says, ‘The whole world is passing through a tough time due to the Corona epidemic. But the happy thing is that cricket has started to return to thefield   overcoming  the fear  of  the  deadly  virus.  The  national  cricket   team  have already returned to the country, concluding their New Zealand tour. The team are now set to tour Sri Lanka to play the two-match test series.’

Walton  is  proud to   be associated  with this   glorious event.  It  is expected  that millions   of   cricket   fans,   players   and   all   those   associated   with   cricket   will   be inspired by this event. Walton is with cricket and will always be,’ he adds.

According to the schedule, Sri Lanka will host Bangladesh for a two-match Test series this time. Bangladesh will reach Sri Lanka on April 12. The first Test is scheduled to be played from April 21 at Pallekele International Cricket Stadium in Kandy while the second game is set to start on April 29.

Walton is playing an important role in countries sports arena providing support during its national and international events. Where there is cricket, there is Walton. Especially wherever the Bangladesh national cricket team is going to play- Waltonis there.