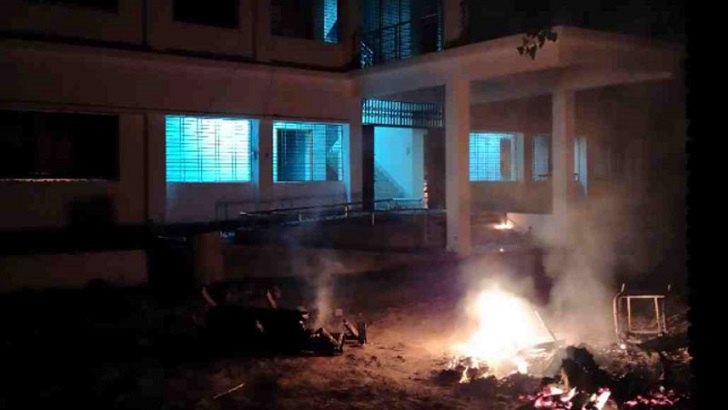 A number of offices and houses were vandalised and set on fire by locals in Faridpur’s Saltha Upazila on Monday night after a man was injured in an apparently unprovoked attack by a public servant.

The Upazila Parishad, residence of Upazila Nirbahi Officer, police station, office of Assistant Commissioner (land), upazila agriculture office, and sub-registry office, among others, were vandalised and some of them were torched.

Monday was the first day of a weeklong countrywide lockdown to contain the transmission of Covid-19. The government has directed people to stay in their homes and not to go out between 6pm and 6am until there is an emergency.

Md Zakir Hossain Molla was returning home from Fukra Bazar in Sonapur Union around 7:30pm after having tea. AC Land Marufa Sultana Khan Hiramoni went there with her team to see how the government-enforced lockdown was going.

Zakir said a man got down from the AC Land’s vehicle and hit him with a stick that broke his spine.

He is being treated at the upazila hospital.

The incident sparked tension at Fukra Bazar and villagers soon gathered there. They attacked a police team led by Sub-Inspector Mizanur Rahman which had gone there to defuse the tension.

Agitated locals then headed towards the police station and surrounded it.

Saltha Police Station’s Officer-in-Charge Ashikuzzaman said they sent a team to Fukra Bazar after getting a call from the AC Land. “The team was attacked after reaching the spot. SI Mizanur was hit in the head,” he said.

Nurul Islam Nahid was at the Uapzila Parishad when it was attacked.

“I couldn’t see a thing because of the smoke,” he recounted. “I jumped from the second floor and escaped through the backdoor.”

He said it was an “unprecedented violence” in Saltha.

Faridpur’s police chief Md Alimuzzaman said there was a “misunderstanding” between the officials, who were enforcing the government’s directive during the lockdown, and the locals.

The agitated locals vandalised and set fire to various establishments including the Upazila Parishad office, police station and the upazila chairman’s residence.

AC Land Hiramoni could not be reached for comments.