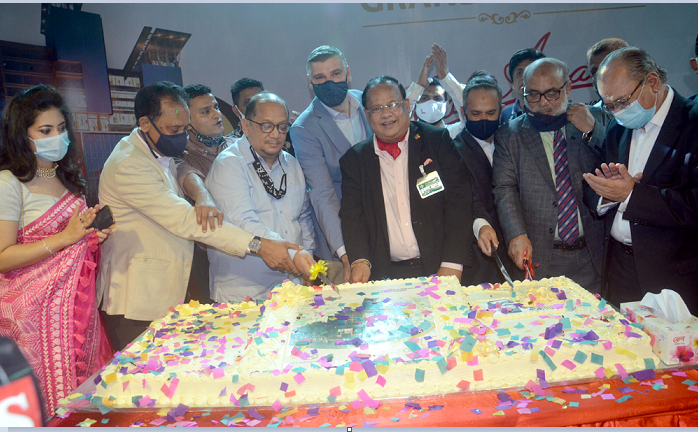 The largest supermall in Chattogram ‘Bali Arcade’ was opened to the public on Friday (April 2) evening following by health rules.

The supermall was officially inaugurated at Chawkbazar in Chattogram with a unique initiative of Seth Properties for business, shopping, and entertainment. The supermall is built with world-class facilities and it is a signature project of Seth Properties which is a subsidiary company of Seth Group. The Bali Arcade project has constructed on Sirajuddaula Road.

The shopping has 3 cineplexes, 2 food courts, convention hall, 260 shops, showroom, and display center. It is built with world-class architectural design. The project includes one of the country's largest 30,000 square feet amusement parks.

It may be mentioned here that "Bali Arcade" has been named late Sakina Begum (Bali). She was the only daughter of late Azizur Rahman Chowdhury and the wife of late Mahabubul Alam Seth (Bachchu Nawab).

The world-class Supermall Bali Arcade also has world-class individual cuisine-based food courts, individual ladies zones where buyers and sellers all are women. It has various brands including mobile phones, mobile accessories, cosmetic zones, Gents Brandshop, Lifestyle, Parlors, and other international brands and over 150 car parking areas. The entire shopping mall is covered by free WiFi. Two huge giant cine screens have been set up in front of the shopping mall to display various video content including advertisements.

On the occasion, Alhaj Mohammad Solaiman Alam Seth, Managing Director of Seth Properties said that a week-long colorful program has started from 27th March on the inauguration of Bali Arcade. Every program inaugurated fly lanterns.

He added, before the inauguration, the entire Bali arcade was covered with curtains. The Bali Arcade was jointly inaugurated by the engineering officers, employees, and all the workers who have contributed to the construction. Stars and celebrities will be participating in various ceremonies throughout the month of Ramadan. All shoppers will get special gifts if they shop from Bali Arcade in Ramadan.