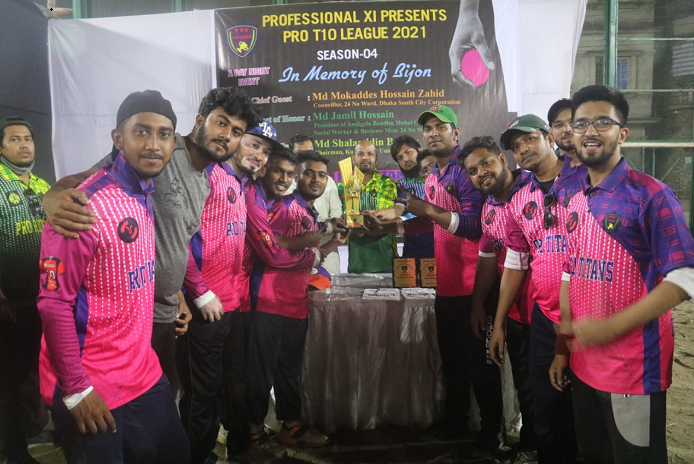 With Corona spreading in the country day by day, many competitive sporting events of the country has been postponed. But the organizers of the Pro T10 cricket league maintained the social awareness during the event with every players were masked and sanitized.

Total six teams took part in a 10-over robin round league basis tournament where favourite Pro Titans beat Pro Kings by 38 runs in the final to clinch the title in the evening under the flood lights.

After plenty of sixes, fours and exciting finishes in the league stage, the action shifted into semifinals under the lights where Pro Kings were the first team to book final following a dominating 10-wicket wicket over Pro Knights in the first semifinal.

However Pro Titans secured their final spot after beating Pro Riders by 36-run in the second semifinal.

The match was reduced to 5-over a side in the final and after electing to bat first, Pro Titans posted a challenging 109 for 2. Raz top scored 52 while Jibon was unbeaten on 48.

In response Pro Kings were forced to stop at 71 for four in the restricted five overs despite AL Amin’s counter-attacking 32 run cameo.

Pro Titans’ Jibon was adjudged the player of the final and the tournament. Thousands of local crowd witnessed the cricket tournament and cheered their favourite teams.

The Professional XI, one of the biggest cricket clubs of Azimpur organized the exhibition tournament for the 3rd time. The cricket event was played among all the Inter-Professional XI players.

The winners of the tournament received trophy where notable performers were also rewarded.