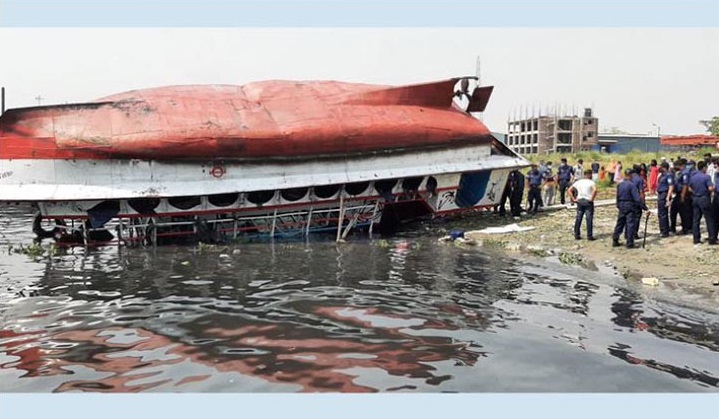 The sunken launch in the Sitalakkhya River

Twenty four more bodies were recovered from the sunken launch in the Sitalakkhya River, taking the total death toll from the tragic accident to 29.

Golam Maula Sadeque, chairman of Bangladesh Inland and Water Transport Authority (BIWTA), said the divers of local fire service and coast guard managed to salvage the sunken launch with the help of salvage ship ‘Prattay’ and recovered 24 more bodies from the launch at noon.

Meanwhile, the divers announced suspension of the salvage operation around 1:30 pm on Monday.

Earlier, bodies of five people were recovered after the launch capsized in the Sitalakkhya River on Sunday.

Dipak Chandra, Officer-in-charge of Banda Police Station, said divers managed to retrieve bodies of five women from the river around 1 am.

The launch carrying around 50 passengers sank in the Shitalakkhya River in Narayanganj when an oil-laden tanker hit Munshiganj-bound launch ML Rabit Al Hasan around 6pm.

The launch capsized soon after the collision. Around 20 passengers managed to swim ashore.

Police said the oil tanker could not be seized as it did not stop after hitting the launch.

The local administration formed a seven-member probe body while BIWTA formed a four-member committee to look into the incident.

The bodies were handed over to the local administration.

Source: With inputs from UNB