Walking the extra mile for water in coastal Khulna 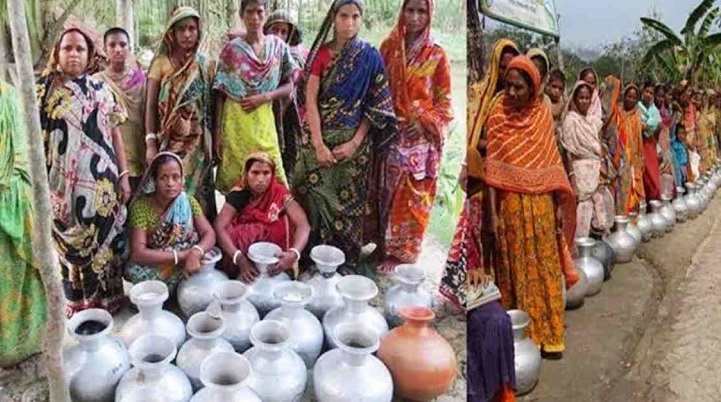 At the crack of dawn every day, 39-year-old Aleya Begum's  struggle for water begins. A resident of Sutarkhali village in Khulna's Dakop upazila, she wakes up around 5 am daily to the family rooster's sunrise song to walk for kilometres to fetch water for her husband and children.

On a normal day, she makes two trips to the water source to bring home two pitchers of water. "After finishing the household chores by noon, I go out again in the afternoon to fetch water. This is my daily routine. Monsoon is the only season when I am spared of the toils and pains as the rains assure us of fresh water supply for 3-4 months," Aleya exclaims.

She is not alone. Almost all the women residents of Sutarkhali and nearby villages are forced to walk the extra mile every day to fetch water for their families. Not to mention that in villages across Bangladesh, the task of fetching water and doing other household chores falls to women.

Aleya's village Sutarkhali has been facing an acute drinking water crisis since Cyclone Aila devastated the coastal areas of Satkhira, Khulna and Bagerhat districts in 2009. Large parts of the village remained submerged for nearly five years as salt water from the tidal surge that followed the cyclone contaminated all portable drinking water sources.

At least 50 lakh people in these upazilas are affected by the severe water scarcity, a rough estimate suggests. Sufia Begum, a resident of Kalabagi Jhulanta village in Dakop upazila, is another victim of the water crisis. "For several years now, drinking water has been brought from Sadar upazila in containers through trawlers," she said.

Rudra Rani Biswas of Gunari village in Dakop upazila, also narrated her ordeal to UNB. "We are facing acute water scarcity. Getting water is more difficult these days than managing two square meals daily. It's high time that the authorities took stock of the situation to avert a catastrophe."

Experts attribute the water crisis to climate change and say that it is only going to get bigger with each passing year.

So, what's the way out? Experts say that one possible solution is to conserve rainwater in large tanks during the monsoon. "Harvesting rainwater for future use is a practice common in many western countries too. It's one of the simplest and oldest methods of self-supply of water for households," said an expert.

Other ways, according to them, could be to install purifiers to make salt water potable and digging tube wells. "Though experiments have shown that deep tube well water is relatively less saline and arsenic-free, due to siltation and presence of rocks and high salinity, it's next to impossible to install them in all coastal areas," he said.