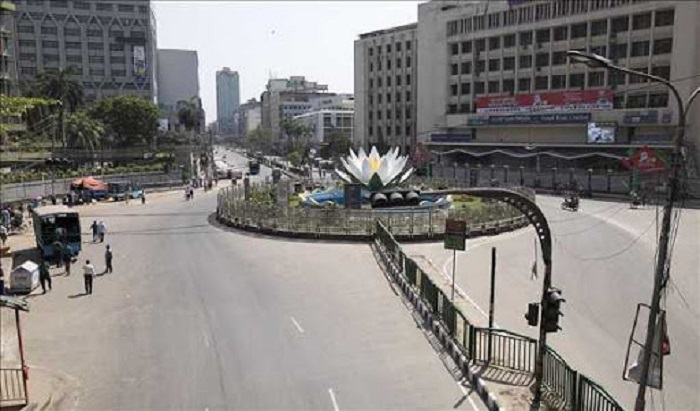 In an effort to curb the spread of coronavirus, the government enforces a weeklong countrywide lockdown today, slapping restrictions on the movement of people, public transport and other activities.

The Cabinet Division issued a notification on Sunday in this regard.

The curbs will remain in force from 6am today till April 11 midnight to prevent the further spread of the deadly virus which has so far infected 637,364 people and killed 9,268 of them in Bangladesh since the first three cases were reported on March 8 last year and the first death was registered 10 days later.

Bangladesh on Saturday recorded 53 deaths while 7,087 infections, the highest number of coronavirus cases in a single day since the pandemic.

According to the notification, the operation of public transport -- buses, trains and launches -- as well as planes will remain suspended during the period.

Markets, shopping malls, hotels and restaurants will also come under the purview of the restrictions.

Meanwhile, traders staged demonstrations at different parts of the capital, including New Market and Mouchak, against the government’s decision.

Road Transport and Bridges Minister Obaidul Quader on Sunday said the operation of public transport will remain suspended from today.

While speaking at a programme at the Awami League president’s Dhanmondi political office virtually, he, however, said goods-laden vehicles, transport for emergency services, energy, perishable and relief items, newspapers and garment materials will remain outside the purview of the suspension.

Calling upon the people to wear masks and follow the health guidelines properly, Quader, AL general secretary, said the administration and law enforcement agencies and others concerned should be stricter to this end.

The 11-point notification mentioned that the operation of all kinds of public transport will remain suspended for a week. But cargo vessels, production system and emergency vehicles will remain outside the purview of the ban.

The restrictions will not be applicable for people going abroad and returning from abroad.

All government, semi-government and autonomous offices can use own transport to carry a limited number of employees to working stations only to perform emergency duties.

Production at factories and construction work will continue with the own transportation facilities of the organisations.

Citizens are barred from venturing outdoors from 6pm to 6am without any emergency like buying medicines and daily essentials, seeking medical treatment or burial of the dead.

Restaurants and food shops can supply foods but no dine-in facility should be available under any circumstances.

Shopping malls will be closed but e-commerce sites will be allowed to operate. The staff must follow the health protocols in running online trading and no customer should appear at the shop physically.

Daily essential commodities, including kitchen ingredients, can be sold in open places from 8am to 4pm. The kitchen market authorities or the local administration must ensure that the health guidelines are followed.

Bangladesh Bank will issue directives on how to continue the banking services on a limited scale.

The Armed Forces Division will make arrangements to set up a field hospital in Dhaka.

District and local administration will take necessary measures to implement the directives while the law enforcement agencies will strengthen patrolling.

The notification mentioned that those who defy the directives will face legal action.

Various organisations, including Jatiya Press Club and Dhaka Club, suspended services for the safety of their members during the shutdown.

Earlier, amid the sharp rise in coronavirus infections following a gradual downward trend for nearly three months, the government issued an 18-point directive, limiting all kinds of public gatherings and making a 14-day quarantine for new arrivals from abroad mandatory, to chase away the virus.

Bangladesh also imposed a ban on all travellers’ entry into the country from all European countries, excluding the UK, and 12 other countries for two weeks.

Tourist spots in Sylhet, Cumilla, Kuakata, Saint Martin's Island and Chattogram have been shut down for the next two weeks to curb the spread of the deadly virus.

After the outbreak of the virus globally, the government on March 23 last year declared a 10-day general holiday for all public and private offices, except emergency services, from March 26 to check it. Later, it was extended in few phases until May 30.

The government also deployed members of the Armed Forces in the field to help the civil administration maintain social distancing and strengthen coronavirus preventive measures.