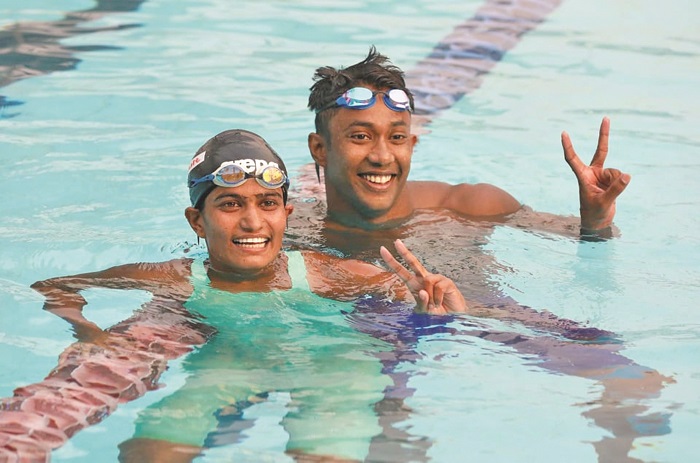 Besides, Asif achieved gold in men’s 50m freestyle with a new national record of 23.32 seconds. He also broke his own 23.85 seconds record that he made in 2019.

Sonia, who earlier made a national record in the women’s 100m butterfly, continued her domination in women’s 50m butterfly. She earned gold with a new record of 30.63 seconds. She broke Nazma Khatun’s 31.17 seconds record that was made in 2016.

After making two consecutive records, Sonia said that she was satisfied with her performance.

“I concentrate in pools for doing my best. I gave my best in 50m, so I earned gold. I’m satisfied with my performance,” Sonia said.

Navy athlete Shirin Akter made a new national record of 24.20 seconds in the women’s 200m sprint on the third day of athletics discipline at Bangabandhu National Stadium on Sunday. She broke Nazmun Nahar Beauty’s 24.30 seconds record of 2006.

Shirin, who earlier became the country's fastest woman securing gold in women’s 100m sprint, said that hard work, determination and a lot of sacrifices help her to reach the milestone.

“I spend too much time on fitness. I broke Beauty apu's record today, it feels really good,” Shirin said.

Ansar bodybuilder Maksuda Mou earned gold in the women’s open category on the third and final day of bodybuilding discipline at the National Sports Council auditorium.

Ansar ended top in the men’s category of the wrestling discipline with 5 gold, 2 silver and a bronze on the third and last day at Sheikh Russel Roller Skating Complex.

In the day’s events, Ansar wrestlers Sheikh Shipon and Rakibul Islam earned gold in 79kg and 92kg respectively while Kamruzzaman from Police earned gold in 86kg.

Nur Akter Banu from Ansar earned her fourth gold in the women’s floor exercise on the third and final day of gymnastics discipline at the National Sports Council.

Ansar topped in this discipline with a total of 5 gold, 3 silver and 7 bronze.

Asim Kumar Das from Police made new records in the men's compound singles qualification round on the second day of archery discipline at the Shaheed Ahsan Ullah Master Stadium in Tongi.

The recurve qualification round was also held on Sunday at the same venue.

Ansar clinched gold in both men's and women's events on the second day of Kho Kho discipline at Paltan maidan.

Grand Master Enamul Hossain Razib from Police earned gold with 8.5 points in men's individual blitz on the third day of the chess event at the National Sports Council.

With the day’s feat, Ansar consolidated the top slot in the medal table with 3 gold, one silver and 2 bronze from 4 events.