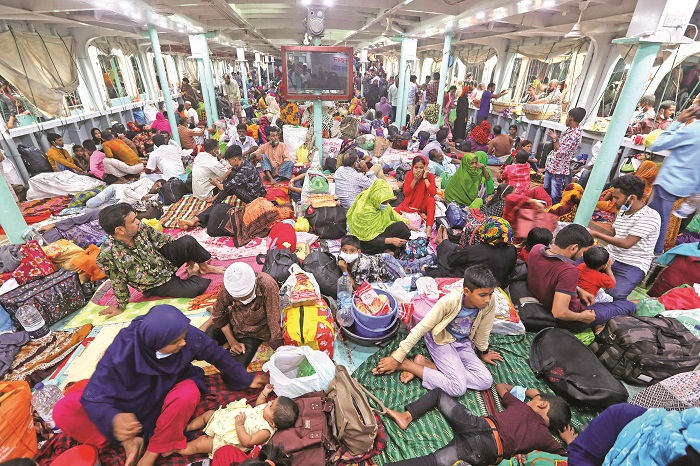 Thousands of people are leaving Dhaka for their village homes violating health guidelines. The photo was taken from inside a launch at Sadarghat terminal on Sunday.--Reaz Ahmed Sumon

Hundreds of home goers have thronged the inter-district bus stations, launch terminal and railway stations on Sunday to leave Dhaka after the announcement of a seven-day lockdown from Monday to prevent further spread of coronavirus.

The home goers were hardly maintaining any social distancing measures and health precautions --- raising the fear of a further spike in Coivd-19 infection.

Considering the worsening situation of Covid-19, the government has imposed a 7-day lockdown across the country from Monday. Movement of public transports will be restricted from 6:00 am on April 5 to 12 midnight on April 11, according to a cabinet division circular.

People said the duration of the lockdown might be extended. Many people are rushing to leave Dhaka in fear of getting stuck due to lockdown for an extended period, sources say.

Dr Nazrul Islam, a member of National Technical Advisory Committee on Covid-19, told the Daily Sun that a huge gathering of people in the exit points of Dhaka might cause a further spread of coronavirus in villages across the country through the home goers.

Since Saturday, the pressure of homebound people is increasing at the train stations, bus terminals and launch terminal from morning to midnight, according to the launches and buses operates.

People were seen waiting for hours to get a seat in buses that are already scarce in number. The excessive pressure of homebound people leaving the capital has created gridlocks on highways and roads.

Rafiq Ahmed, a private employee waiting at the Gabtoli bus stand, said “Our office has introduced home offices throughout the lockdown. As my family is in the village, why would I stay in Dhaka? Instead, I will be able to spend time with everyone if I go home. So I am going home.”

Kabir Hossain, who will travel to Netrokona, said “The lockdown is from Monday. I have nothing to do in Dhaka during the lockdown. So I am going to the village.”

While visiting Kamalapur railway station in the capital on Sunday morning, a huge crowd of ticket collectors were seen at the entrance of the station.

Haider Ali, who was standing in line to buy tickets, said “I would travel to Pabna. I came to Dhaka for work. But I am returning to Pabna without completing the work due to the announcement of lockdown. Because, when everything stops, I can’t go home again.”

Another passenger Nazmul Hasan will go to Ullapara in Sirajganj. He said “I work in Dhaka. My office will be closed from Monday due to the lockdown. So I have no benefit in staying in Dhaka. That’s why I’m going home.”

Another passenger in the line, Abdul Latif, said, “I work as a day labourer in Dhaka. There will be no work during the lockdown. And if there is no work, I will starve in Dhaka. So it's better to go back.”

Kamalapur Railway Station Manager Mohammad Masud Sarwar said the announcement of lockdown has increased the pressure of passengers at the station.

“However, we are selling tickets for half of the seats as per the instructions of the government,” he added.

He said all passenger train services have been suspended since Monday and all tickets sold for 5 to 7 April are being refunded.

People from 21 districts in the south-west have started flocking in Paturia Ghat Point from different parts of the country, including the capital Dhaka since Sunday morning. As the day progresses, the queues for passenger transport become longer.

At around 2:00 pm on Sunday, more than a hundred passenger transports and several trucks carrying goods were seen waiting in the Paturia Ghat area.

Hundreds of people have thronged the Dhaka-Tangail highway from Sunday morning after the announcement of a seven-day lockdown from Monday. However, many people could not reach their destination even after waiting for hours due to the transport crisis.

Hundreds of people were waiting at Elenga bus stand area on the Dhaka-Tangail highway. No physical distancing was being maintained and the restriction on keeping one seat vacant was being ignored. Most of the public transports were carrying extra passengers and charging extra fare.

People were not maintaining social distancing at Paturia launch ghat in Shibalaya upazila of Manikganj.

Although the fare has been increased by 60 per cent for half-passengers, launches are still carrying passengers in their full capacity towards Daulatdia Ghat in Rajbari.

Shibalaya Upazila Nirbahi Officer (UNO) M Ruhul Amin Rimon said, “We are trying to convince the people. I am also miking for them to follow hygiene rules and to wear masks. We are also monitoring the launches so that they do not carry more than half the capacity. If anyone legal action will be taken if anyone ignores this rule.”