The pathway to a cleaner Bangladesh: Understanding engines and emissions 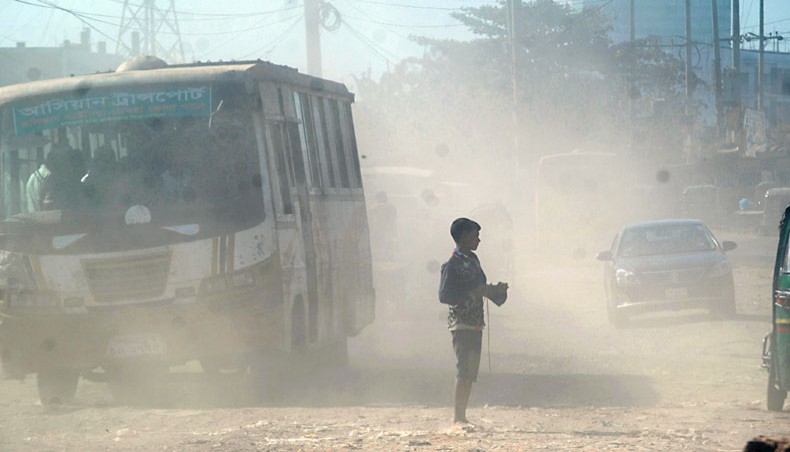 The earth's climate is becoming increasingly unstable, posing an existential threat to human society as we know it. In the next decade, societies will be forced to either confront this challenge or be overwhelmed by it.

Our response will define the future for decades to come.

In fact, as part of a global joint initiative of limiting global warming to well below 2, preferably to 1.5 degrees Celsius, compared to pre-industrial levels, the Paris Agreement- a legally binding international treaty on climate change was adopted by 196 Parties at the Conference of Parties (COP) 21 in Paris in 2015; was entered into force in November 2016.

In a fast-moving globalized world, the only way to bring sustainable change across economies is through imposing policies that regulate and control the impact of human civilization on the environment.

But how does climate change affects us-Bangladesh?

Bangladesh is one of the largest deltas in the world, formed by a dense network of the distributaries of the rivers. It is frequently cited as one of the most vulnerable countries to climate change because of its disadvantageous geographic location; flat and low-lying topography; high population density; high levels of poverty; reliance of many livelihoods on climate-sensitive sectors, particularly agriculture and fisheries.

80 per cent of the land is a floodplain, and only in the extreme northwest do elevations exceed 30 metres above mean sea level, making the majority of Bangladesh (with the exception of the highlands) prone to flooding.

Additionally, more than 12% of Bangladesh’s urban population had asthma in 2002, according to a study by Orion Pharmaceuticals Limited, citing air pollution was given as one of the main causes and was also attributed to other pulmonary conditions which have a huge toll on the health of the urban population.

To be able to comprehend the pathway that we need to take to ensure a cleaner Bangladesh, let’s take a look at the biggest pollutant factors for Bangladesh first.

Vehicles have increased by 135% since 2003 in Bangladesh. In 2012, vehicles were the second largest air polluter after brick kilns, according to a study conducted by the Bangladesh Department of Environment (DoE). Most of these are commercial vehicles not maintained properly, thus causing huge air pollution.

The thing is Bangladesh does have a policy that helps fight this.

The government set detailed and comprehensive emission standards to improve air quality in Bangladesh, for the first time, in 2005. The standards allowed a petrol-run vehicle to emit 4.5% carbon monoxide and 1,200 parts per million (ppm) of hydrocarbon.

The exponential growth of vehicles over the last decade has forced Bangladesh’s authorities to set new transport emission standards to curb increasing air pollution. The DoE has revised standards set in 2005 for diesel and petrol run vehicles, but transport authorities currently lack the facilities to enforce them

The Department of Environment (DoE) has devised separate emission standards for vehicles powered by diesel, petrol and compressed natural gas (CNG), partly in line with its 2012 study on air pollution by the transport sector.

BUT. currently, the country has no policy dictating or imposing a benchmark on the imported vehicle engines that meet the HSE standard, unlike neighboring countries that have implemented this almost a decade ago; successfully controlling engine emissions from vehicles.

Although the reduction of pollutants from vehicles run by petrol and diesel will improve air quality in Dhaka and other parts of Bangladesh, we still need a more focused policy on the type of engines that vehicles rely on; to cut down on emission and reduce pollution.

Surprisingly, experts say engine standard and fuel can change the game of ensuring a cleaner Bangladesh.

To put Bangladesh on a greener growth trajectory, the government and policymakers should consider strengthening policies and institutions, and enforce environmental standards with a shift to cleaner technologies to contain the increasing air, water and soil pollution as well as industrial pollution.

The commercial or transport vehicles that make up a huge part of the emissions from the vehicle currently use BS-I BS-II Euro I Euro II standard engines imported from neighboring countries as well as Europe; that themselves rely on engines with better environmental compliance standards such as the BS-VI Euro VI standard, transitioning only recently from BS III BS IV Euro III Euro IV engine standards.

But transitioning from BS I and Euro I standard to BS VI and Euro VI standard is impractical and infeasible. The transition needs to be linear, following the global trend, aiming for BS IV or Euro IV standards first; rather than disrupting inorganic ecosystems that would follow with the sudden elimination process.

The sulphur content in BS-IV Euro IV fuels is much lower than that of BS-I BS-II or Euro I Euro II fuels. Hence, improved fuel will only lead to lower pollution. Sulphur works as a lubricant for the injectors of diesel engines, so, the low sulphur content might lead to higher wear and tear in the long run. However, the engines can be safely run for lakhs of kilometres without requiring any additional maintenance.

Additionally, petrol-fuelled engines and their emission abatement technologies suggest that there may be

According to experts, this will ensure major cities around the nation have a reduced vehicle emission rate that has been one of the major pollutants and a threat to the sustainability of the nation.

It is already apparent that Bangladesh as a founding member of the Climate and Clean Air Coalition (CCAC) and since 2012 has been strategically reducing short-lived climate pollutants (SLCPs) with tools ranging from green technology investment for brick kilns to climate finance funds that will help spark the transition to the country’s green future.

Ensuring the formulation of a policy coherent to what experts have pointed out, raises the minimum standard of imported engines and the fuel it uses- counteracting the biggest pollutant factors for the existing pollution level in Bangladesh.

If achieved, it will be nothing short of an unprecedented leap for Bangladesh in its 50 years of inception!!