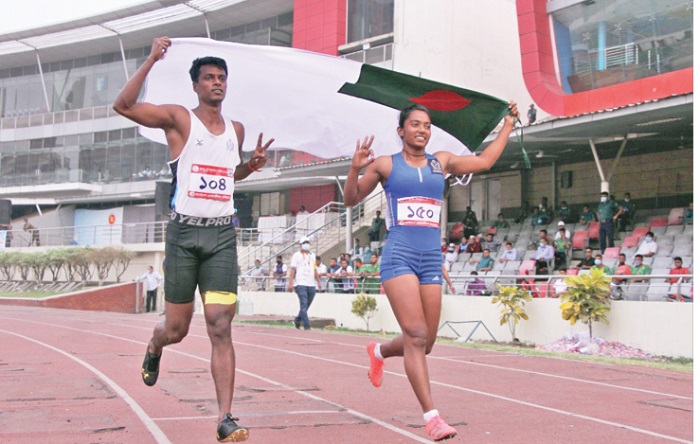 Navy athletes Md Ismail and Shirin Akter continued to dominate in sprint events as they became the country’s fastest man and woman respectively in the Bangabandhu Bangladesh Games at the Bangabandhu National Stadium on Saturday.

Both the athletes, who are dominating national meets in recent years, however, clinched their first-ever gold medal in 100m sprint events in Bangladesh Games.

Ismail said that he could have done better if he got enough time to get prepared for the Games.

Shirin, however, expressed her satisfaction after winning her first gold in Bangladesh Games.

“I finished runners-up in the last Bangladesh Games in 2013. It is first gold here and 12th consecutive gold at the national level. I’m really happy,” she said.

Army cyclist Faysal Hossain clinched the gold medal in the men’s 1000m time trial with a new national record of 1:20.40 min in the cycling discipline at the Army Stadium. Faysal broke another Army cyclist Ekramul Islam’s previous record of 1:26.10 min that he made in 2017.

BGB cyclist Nishi Khatun clinched the gold medal in the women’s 500m time trial with a new national record of 45.47 sec while Samapti Biswash clinched the silver medal with the timing of 45.51 sec. Both Nishi and Sampati broke the previous record of 48.65 sec in this event.

In the men’s 200m backstroke, Army swimmer Juwel Ahmed secured the gold medal with a new national record of 2:16.12 min on the opening day of swimming discipline at the city’s Syed Nazrul Islam National Swimming Complex.

Juwel broke his own 2:16.13 min record which he made in the national championship in 2019.

Navy swimmer Mahdunnabi Nahid secured the gold medal in the men’s 100m butterfly with a new record timing of 56.71 sec. Nahid broke his own 56.82 sec record that he made in the national championship in 2019.

In Wrestling, Bangladesh Ansar dominated in the women’s event with Mashinu Marma earning gold in 53kg and Shukanti Biswash claiming gold in 52 kg.