A Group of 10 Heads of Missions visited Bhashanchar 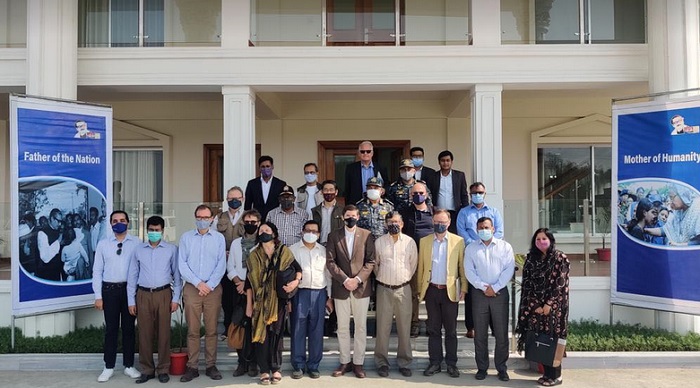 The Ministry of Foreign Affairs organised a day-long trip on Saturday to Bhashanchar for a group of High Commissioners and Ambassadors based in Dhaka.

The visit was organised as the part of the Government’s engagement with the International Community including the United Nations on the relocation of Rohingyas from Cox's Bazar to Bhashanchar, said the Foreign Ministry in a press statement.

The objective of the visit was to provide the Ambassadors with an opportunity to witness the massive development and humanitarian projects undertaken by the Government of Bangladesh in Bhashanchar. During the tour, the group had the chance to visit different infrastructures including embankments, buildings, shelters, other facilities and amenities available on the island.

The group visited several capacity-building projects such as sewing, handicrafts making etc, the skills that the Rohingyas would be able to utilise on their return to Myanmar.

The Ambassadors freely interacted with the Rohingya representatives and shared their thoughts and hopes.

During the interactions, the Rohingyas profusely thanked the Hon’ble Prime Minister Sheikh Hasina and the Government of Bangladesh for the exemplary humanitarian support that have been extended to the Rohingyas since the mass exodus.

At the same time, they expressed their willingness to return to their homeland in Myanmar.

“I want my children to grow with their own national identity in their own country,” a Rohingya representative stated.

The Rohingyas conveyed their high satisfaction over the existing facilities in Bhashanchar, which they considered safe, secured crime-free compared to the congested camps in Cox’s Bazar.

Some Rohingyas underscored the need to expand learning facilities for children and provide them opportunities for farming and fishing which would help in keeping them active.

The group of Ambassadors spent some time with the Rohingya children in an informal learning center.

This was the first-ever visit to Bhashanchar by foreign Heads of Missions.

The trip was preceded by a UN team’s visit from 17-20 March 2021. Earlier a team, led by the Assistant Secretary General of the OIC went to Bhashan Char.

It may be mentioned that Rohingya relocation, which started from 04 December 2020, is in alignment with the GOB’s overall efforts towards repatriation.