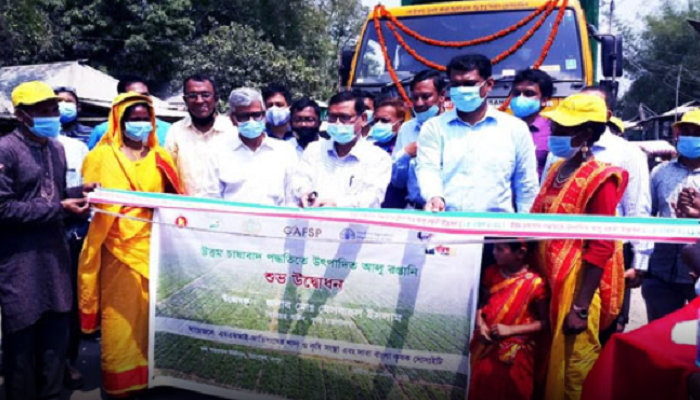 Senior Secretary of the Ministry of Agriculture Md Mesbahul Islam has said initiative has been taken to export two lakh tonnes of potato to Malaysia from Rangpur this year.

He disclosed the information while inaugurating export of potato, produced adopting good agricultural practices, by cutting ribbon in a function held at Pairaband union in Mithapukur upazila on Saturday afternoon as the chief guest.

The Agriculture Secretary said the present government is working relentlessly to save farmers and agriculture.

The DAE is vigilant to ensure that no crop is wasted. The FAO is working to further strengthen potato exports.

“The process of potato export needs to be transformed into competition so that everyone gets interested in becoming an exporter. Potato varieties suitable for export and processing should also be developed to enhance export,” he said.

The Senior Secretary said Bangladesh produces more than 11 million tonnes of potatoes every year. Of which, there is a surplus of four million tonnes.

He lauded potato farmers for successfully cultivating potato and getting its bumper harvest braving the coronavirus pandemic though many of them were worried about getting profits from their investment or whether their potatoes would be wasted.

“But partnership of potato farmers with potato exporters and production of quality potatoes in accordance with good agricultural practices have proved all their fears wrong and ensured fair price,” he said.

The FAO and DAE have linked potato farmers’ organisations to exporters, retail chain shops and cold storages helping in exporting a total of one thousand tonnes of potatoes last year through connections with exporters.

“It has been possible to connect with more exporters this year. Potatoes will be sold and exported at a fair price. This time, two lakh tonnes of potato will be exported to Malaysia from Rangpur,” he said.

There are plans to export potatoes to Nepal and Middle Eastern countries too.

“In addition to setting up seed potato laboratories, the private sector is being engaged in setting up farm level storage facilities,” he said.