‘China get out of Myanmar’ say pro-democracy supporters 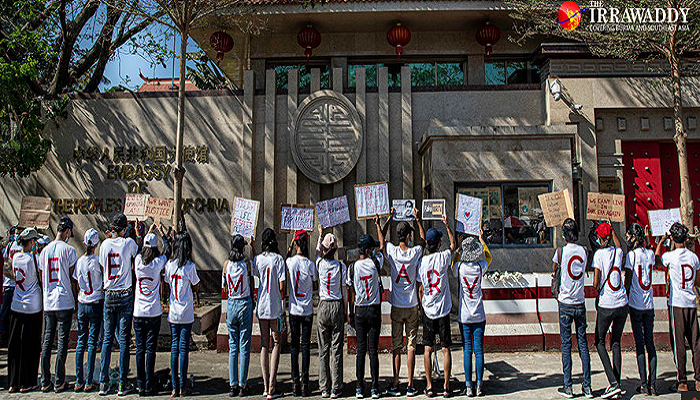 Pro-democracy supporters in Myanmar have called for the Chinese Embassy in Yangon to be closed, after China again blocked an attempt on Thursday by the United Nations Security Council (UNSC) to impose sanctions on the military regime in an attempt to stop the bloodshed in Myanmar.

Thousands of pro-democracy supporters, including prominent activists and celebrities, posted messages on their social media on Thursday and Friday saying, “China Get Out of Myanmar!”, “Get Out Chinese Embassy!” “We don’t need Chinese Embassy, Get out of Myanmar Right Now!!”
At least 550 civilians have died in the junta’s ongoing crackdowns against anti-regime protesters. Many people in Myanmar expected that the rising death toll would prompt the UNSC to apply “serious pressure” on the junta to stop its use of lethal force against protesters. But China again ruled out “sanctions or other coercive measures” against the regime at a UNSC closed door meeting.

Moreover, China insisted on eliminating strong language from the UNSC statement such as “readiness to consider further steps”, which could include sanctions against the Myanmar military. The UN also had to soften the language of the statement by removing words such as “killing” and “deplore” to describe the use of violence against peaceful protesters, because of China’s resistance to such language.

China’s stance prompted a fresh outpouring of resentment towards China among the people of Myanmar. Anti-China sentiment is nothing new in Myanmar. It hardened over fifty years of rule by the former junta that relied on Beijing as one of its few international allies and which turned to China for much of the hardware it used to suppress dissent, grab people’s land and exploit the country’s natural resources.

That deep-seated resentment of China swelled across Myanmar following the Feb.1 coup, thanks to China’s failure to take action against the junta, unlike the many western countries who have imposed sanctions. China has also failed to demonstrate sympathy towards the innocent civilians killed by the regime’s security forces during their deadly crackdowns, prompting many Myanmar people to believe that Beijing is supporting the junta.
Among the thousands of responses to China’s latest stand at the UNSC, one Twitter user said, “You have our blood on your hands Chinese Communist Party! Chinese Embassy Out Now!! Faker, Loser!”

Another social media user said Shame on you China! They went on to say that civilians in Myanmar were being killed by the military every day, that China didn’t care about Myanmar’s people and that they only support the junta.
“China is killing our future. You again blocked the UNSC. We don’t need a Chinese embassy in Myanmar,” stated another social media user.

The Burmese actress Khin Win Wah called for a boycott of Chinese-made goods. “It is time to boycott all Chinese-made products.”
A Twitter user said, “China is one of the few allies of the military regime and supports the killing of pro-democracy supporters. Please Chinese ambassador, it is time to leave Myanmar. We don’t need you.”

On Wednesday, the United States called for China to use its influence to hold to account those responsible for the coup, saying that Beijing can certainly do more as China has a great deal of leverage.

Washington said, “We want the government in Beijing to use its leverage constructively to support the absolutely legitimate aspirations of the people of Burma to see their democracy restored.”

Ko Bo Kyi, the joint secretary of Myanmar’s Assistance Association for Political Prisoners urged on Twitter that China needs to understand that the Burmese people have already suffered at the hands of illegal military regimes. Action by the UNSC will be helpful for the Burmese people, he said.