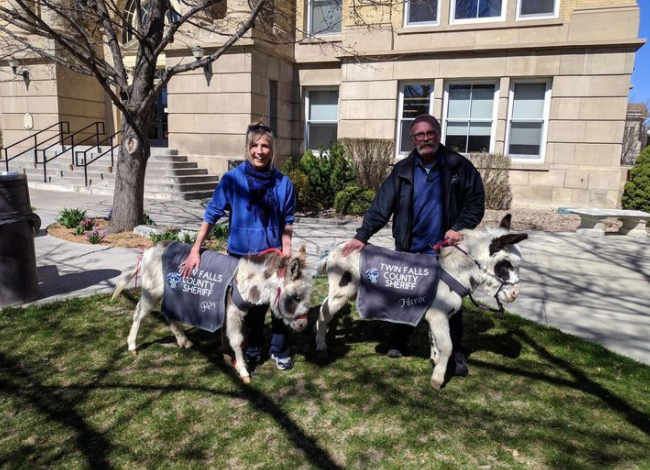 The Twin Falls Sheriff's Office and Nampa Police Department made some odd additions to their drug-sniffing team on Thursday: two donkeys and a goat.

Of course one would think it's strange that donkeys and goats would be added to law enforcement instead of the usual K9, but then you realize what day it is... April 1!

"Ruby and Havoc are certified drug sniffing donkeys assigned to our Patrol Section," the Twin Falls Sheriff's Office posted on Facebook. "Known for their gentle disposition, Sheriff Carter and his wife Deneice are helping them get started with their first tour of duty with this new program."

While this is clearly a joke, the donkeys are quite adorable.

"This week Sheriff Carter will work at selecting the personnel to handle both Ruby and Havoc as they work towards our new donkey drug detection and interdiction program," Twin Falls Sheriff's Office wrote. "Donkeys are known for the keen sense of smell, on par with German Shepherds and Blood Hounds, but they can at times also be very stubborn."

NPD also tweeted Thursday morning hoping the community would crack up while they welcomed a new drug-sniffing goat assigned to SRO Sally Miller.

"Goats are known to be hard-working, but they are also somewhat stubborn & mischievous," NPD wrote on Twitter. "We think he’s going to fit right in!"

While Wayne is actually owned by one of the patrol sergeants, according to NPD, it will not actually be working for the officers.

A sheriff's office in California also had some fun on Facebook and introduced an adorable "new member" of their team.

Their cat, Gato, is the first feline on their "revolutionary Catnine Team."