How resorts can boost local economy in hill districts 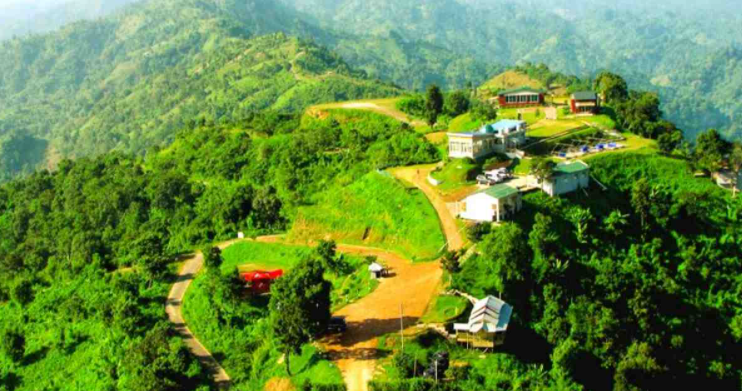 The Chittagong Hill Tracts (CHT) Peace Accord, which ended the decades-long conflict between the Bangladeshi armed forces and Shanti Bahini, was signed in December 1997.

One of the major conditions of the historic peace deal inked between the Bangladeshi government and Jana Sanghati Samiti was to develop the three hill districts -- Khagrachhari, Bandarban and Rangamati -- as tourism hubs. More than 23 years on, this condition still remains unfulfilled -- as vested interests are apparently obstructing its implementation.

In fact, as part of the move to develop the region, construction work on a proposed five-star resort, 'Marriott Hotel and Amusement Park', in Chandra Pahar — formerly the Naitong hung (hill) — in Bandarban’s Chimbuk area has started. But UNB has learnt that some groups are trying to derail the project by spreading rumours on social media.

In 2015, the Bandarban Hill District Council (BHDC) gave on lease some 20 acres of land in Chandra Pahar for the resort project, and a temporary check post was also set up that year only to ensure security in the area.

While the Chandra Pahar resort project has been conceptualised keeping in mind the environmental factors, few local groups -- JSS(M) and PCP (Pahari Chhatra Parishad) -- claim that around 800-1,000 acres of land will eventually be grabbed for its construction. And this could, in turn, displace over 10,000 residents of nearby villages.

From taking to social media to holding periodic protest rallies, these groups have been misleading local residents since construction of the five-star facility began in June 2020, after approval of the project's layout by the government.

However, a reality check by UNB has revealed that the area closest to the project site is Dholapara, some 1.3 km (aerial distance) away.

Project manager Sirajul Islam said that the distance from the resort site to Kalaipara and Erapara of Mro community is 5km, and that of Kaprupara and Dolapara is 3.5km and 2.5km, respectively. "So there will be no acquisition of land belonging to the local ethnic groups or any loss to their villages," he said.

The vested groups have also spread rumours that local farmers will lose jhum cultivable land due to the project. "This is absolutely not correct. They can very well continue with jhum (or shifting) cultivation," Sirajul said. Besides, BHDC has allotted nearly three acres of land to each Mro family for cultivating mixed fruits.

On the allegation that the project will destroy the cultural heritage of the local communities, Sirajul said it would rather help preserve the same. "Once the resort is complete, domestic and foreign tourists will get a taste of the local culture."

Moreover, he said that if the project is implemented, "local people will be able to sell vegetables, fruits and other mountainous products at a fair price". "The resort will also provide employment opportunities to many local residents. Directly and indirectly, some 550-700 locals will get jobs, which will also help improve their living standards."

Sirajul, also the Bandarban Residential Hotel Owners Association's general secretary, said that the construction of the resort would make a significant contribution to the development of the tourism industry in Bandarban as well as the national economy. “A five-star resort can make it the most attractive tourist spot in Bangladesh,” he added.

Bangladesh Poribesh Andolon (BAPA) general secretary Sharif Zamil agreed. "It is essential to help flourish tourism in the hilly areas for increasing economic opportunities of the local people. However, the development of the area must be environment-friendly and participatory through discussions with the local residents."

Poribesh Bachao Andolon (Poba) chairman Abu Naser Khan also said that the expansion of tourism in the three hilly districts must be done, maintaining the natural ecosystem. “It will help improve the living standards of the local residents and create employment opportunities for them,” he said.

"The Chittagong Hill Tracts have the potential to attract a number of foreign visitors every year, as there are hills, forests, rivers, lakes and waterfalls in Khagrachhari, Bandarban and Rangamati districts. The government should immediately take effective steps to convince the local people about the region's tourism potential," said an expert.