Challenges of Radicalization in Bangladesh and the Region 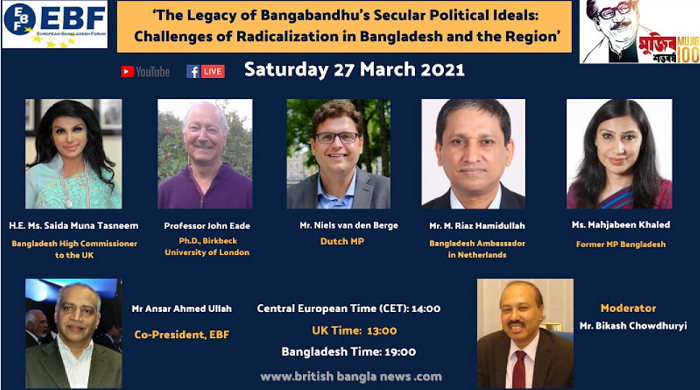 On Saturday 27 March 2021, the European Bangladesh Forum,  a network amongst Bangladeshis living in Europe and Europeans of Bangladeshi origin, organised a conference on the Legacy of Bangabandhu’s Secular Political Ideals highlighting the political philosophy of Bangabandhu. The speakers also addressed other issues, such as, alarming rise of anti-secular forces in Bangladesh and how Pakistan is still engaged in Bangladesh politics supporting allies forces such as the Bangladesh National Party, Jamaat-e Islami and others.

The Program focused on the  role of Pakistan in 1971 Bangladesh Liberation War, reiterating the demand for international recognition of the Genocide committed by Pakistan and demanding adequate ‘reparation’ also seeking an official apology from Pakistan government. “Pakistan must compensate those distressed families and martyred families, who have been suffering for the last 50 years.” One of the speakers expressed.

The discussion also addressed the threats of radicalization in Bangladesh and Europe in the name of religion, highlighting the recent series of killings in Paris and other European countries in the name of Islam.

Bangladesh and India share many things in common, especially in terms of history, politics and culture. India extended all-out support to Bangladesh to liberate her from the clutches of Pakistan in 1971. Bangladesh too lent all possible cooperation to India, inter alia, uprooting the armed insurgency from the soil of Bangladesh, who during the Bangladesh National Party Jamaat-e- Islami rule in late 70s and early 80s, tried to destroy the ideals of secularism and democracy from the country.

Bangabandhu Sheikh Mujibur Rahman, father of the Nation of Bangladesh, joined the Non-Aligned Movement in 1973 which was initiated by India and Yugoslavia. Bangabandhu’s political philosophy best reflected in the four guiding principles of the state: Nationalism, Democracy, Secularism and Socialism, all adopted in the constitution of Bangladesh.

Bangladesh was barely four-years-old when a group of army officers and their men staged a bloody coup and killed Bangabandhu who had led the nation to freedom from Pakistan in 1971. After the assassination of Bangabandhu on 15 August 1975, Bangladesh moved to a different direction, far away from the above four principles and the country witnessed an alarming rise of anti-India and anti-secular forces under the leadership of General Ziaur Rahman and the Bangladesh National Party Jamaat-e- Islami (Islamic party) rule.

“What is a matter of more concern and alarm is that Pakistan is still trying to wipe out the memory of their defeat in 1971 and making attempts to indulge in the internal politics of Bangladesh.

In one such instance, Pakistan Parliament passed a resolution expressing grave concerns over the execution of the Bangladeshi war criminals of 1971. It is reported that Pakistan High Commission paid a huge amount of money to BNP and Jamaat-e-Islami during the 2000 parliamentary elections of Bangladesh. It is also reported that ISI (Pakistan Intelligence Agency) is persuading the Rohingyas in the camps in Cox’s Bazar  Chittagong in Bangladesh not to return to their homeland and they are inciting this community to take part in violence.”

Rohingya camps have already turned into breeding centres of armed violence and in the camps a good number of Islamic NGOs were found active inciting Islamic radicalisation. “Pakistan is also reported to have been fuelling up terrorism and carrying out terrorist activities in the entire region using extremist outfits such as Laskar-i-Taiba.”

Time has now come to remember Bangabandhu, the father of nation of Bangladesh and recall his political philosophy and ideals. “We cannot afford the two years- 2020 and 2021- go unnoticed, as these two years are the most significant period for Bangladesh and India as well.

The year 2020 is the birth centenary of Bangabandhu Sheikh Mujibur Rahman and 2021 is the 50th years of Bangladesh’s Liberation War and marking the establishment of Bangladesh-India bilateral diplomatic ties.”

On the occasion of the birth centenary of Bangabandhu, the Indian Prime Minister, Narendra Modi in a video message said, “We are all witnessing that how, making terror and violence weapons of politics and diplomacy destroys a society and a nation. The world is also watching where the supporters of terror and violence are currently placed and in what state they are, while Bangladesh is scaling new heights.” By saying the above, the Indian Prime Minister pointed at Pakistan.