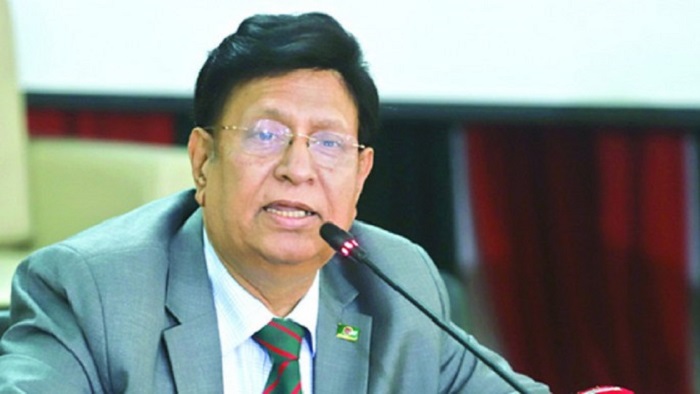 He took part in the 17th BIMSTEC Ministerial Meeting virtually held today in Colombo, Sri Lanka and made this urge.

In the forum, Foreign Minister stated that BIMSTEC is a member driven organization. Members organize the meetings and events to build consensus on cooperation and undertake programme of action in various sectors.

“We need to work simultaneously on a faster pace in all priority sectors to bring synergy in our cooperation to make BIMSTEC a result oriented regional forum,” he said.

Abdul Momen stated that Bangladesh is celebrating the birth centenary of the Father of the Nation Bangabandhu Sheikh Mujibur Rahman and the 50th Anniversary of Independence.

The Father of the Nation was a visionary leader. In early 1972 he thought of working together with the neighbours in the region for collective progress and prosperity of our peoples.

Regional cooperation has been our foreign policy priorities since then.

He added that the Father of the Nation’s able daughter Prime Minister Sheikh Hasina’s decision to join BIMSTEC as its founding member in 1997 bears the testimony of our commitment to regional cooperation. It is manifested in hosting the BIMSTEC Secretariat in Dhaka.

As the host country Bangladesh is committed to extend all possible support to strengthen the Secretariat.

Foreign Minister said that enhanced trade and investment in this region will facilitate income and employment generation. Seamless multi-modal connectivity is a precondition for trade and investment promotion and people to people contact. We need the legal documents to be ready for signature at the earliest.

Hosting meeting regularly and concurrences and participation of Member States in those meetings are very much crucial in this regard.

Bangladesh facilitated and supported the consideration and adoption of a series of vital documents in the meeting chaired by Dinesh Gunawardena, Foreign Minister of Sri Lanka and Chairman of the said Meeting.

The meeting approved/endorsed several BIMSTEC Agreements, Conventions, MoUs and other important documents /instruments envisaged to be signed/adopted at the Fifth BIMSTEC Summit.

The meeting approved the rationalization of sectors and sub-sectors of BIMSTEC and the Template of the Memorandum of Association (MoA) on the Establishment of the BIMSTEC Centres/Entities for adoption during the Fifth BIMSTEC Summit.

The meeting also adopted Joint Statement of the 17th BIMSTEC Ministerial Meeting and BIMSTEC Master Plan for Transport Connectivity for onward submission to the 5th BIMSTEC Summit and recommended the draft Text of the Summit Declaration as per recommendation of the Special SOM held virtually yesterday in Colombo.

The 5th BIMSTEC Summit is expected to be held in Colombo, Sri Lanka in 2021 subject to the COVID situation.