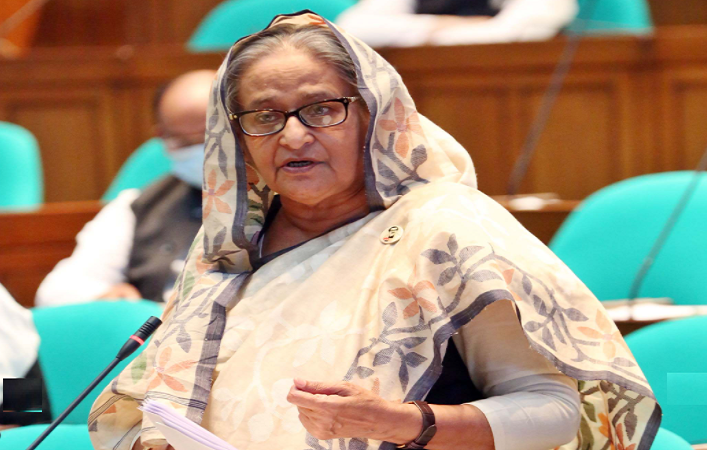 Prime Minister Sheikh Hasina called upon the countrymen to help the government in containing the Covid-19 onslaught by maintaining health guidelines such as wearing masks, avoiding mass gatherings and refraining from going outside unnecessarily in view of the sudden surge in the coronavirus infections.

“We have to bring the situation under control as we did earlier immediately after the coronavirus breakout. We are trying to bring the virus under control. But, assistance from the people is necessary to contain it,” she told the parliament while speaking on a condolence motion on incumbent lawmaker from Sylhet-3 constituency Mahmud Us Samad Chowdhury, who died recently.

The Leader of the House said that a sudden surge in the coronavirus infection rate has been seen in Bangladesh and elsewhere across the world, adding, “The coronavirus (infection) has increased, particularly on March 29, 30 and 31, as high as couldn’t be imagined.”

She said that the country is witnessing the sudden surge in the Covid-19 infection as the people are ignoring the health guidelines since vaccination against the virus started as they are thinking that nothing would happen to them.

“I repeatedly told people to wear masks and follow the health guidelines even after taking the jabs against coronavirus. But, maintaining the health protocol has been stopped,” she continued.

The Prime Minister reiterated her call to the countrymen to put masks on faces which she described as the most important thing and follow other health guidelines to remain protected from the lethal virus.

She said it has been estimated that the people attending marriage ceremonies and going to tourist places for outing mainly contributed to the sudden surge in the Covid-19 infection rate.

The Prime Minister called upon all to avoid mass gatherings and stop going out home unnecessarily and arrange marriage ceremonies on a limited scale following the health guidelines.

“After returning home from offices or other places, take steam of hot water by covering heads with a piece of cloth which can work effectively against the Covid-19,” she suggested.

She also suggested taking mustard oil in the nose before leaving the house, saying that she has been using it since the Covid-19 onset.