Sunflower cultivation in Khulna: Salinity no longer a barrier 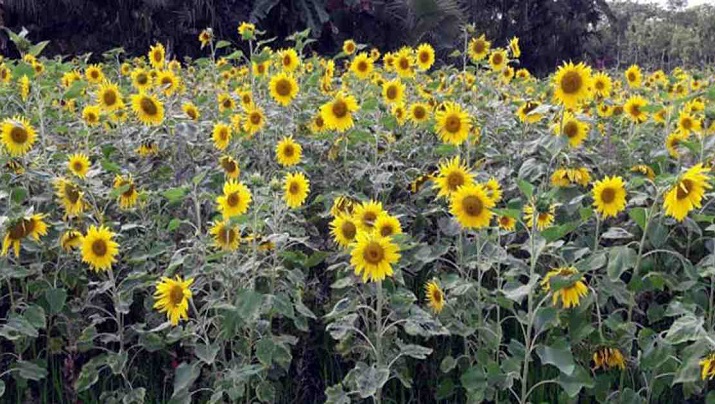 Salinization of soil is a serious problem in the coastal areas of Bangladesh as it has adverse effects on crop production. Despite the challenge, farmers in Khulna’s coastal areas have shown success in cultivating sunflower in fallow saline land.

New possibilities have been created to meet the demand for high quality sunflower oil. Farmers are also expecting bumper yields at low cost.

Research is underway on sunflower cultivation in the Robi season in the Salinity Management and Research Center of Batiaghata upazila of Khulna under Gopalganj-Khulna-Bagerhat-Satkhira-Pirojpur Agriculture Development Project (SRDI Organ).

Sunflower seeds have been sown in wet soil here by ‘dibbling method’ after harvesting Aman paddy in mid-November.  Then the roots of the seedlings were tied and fertilizer was applied.

Three varieties have been used in the study- Local, Bari Suryamukhi-2 and Haisan-33.  Of these, the yield of Haisan-33 variety has been good.

According to the chief scientific officer of the Center for Salinity Management and Research, sunflower is salinity-tolerant crop.  As a result, there is huge potential for sunflower cultivation in coastal areas.

Vast tracts of land remain unused in the south, after harvesting aman paddy. It is difficult to grow any other crop easily as there is salinity in the soil and water.By cultivating sunflower through dibbling method, the fallow land will come under cultivation.

As it is an excellent oil crop, it will meet the demand of sunflower oil which is very beneficial for human health.  This technology needs to be spread across the southern region to encourage farmers to cultivate sunflower, he added.

According to the Khulna District Agriculture Extension Department, 36 mts of sunflower was produced on 19 hectares of land in the district in the 2016-2017 fiscal year.

As most of the land in the coastal area remains fallow after planting paddy in the aman season, this crop will reduce the amount of uncultivated land as well as meet the demand for sunflower oil.

Farmers' interest in cultivating this crop at low cost has increased, he said adding seeing good yield, other farmers in the area have also shown interest in sunflower cultivation.